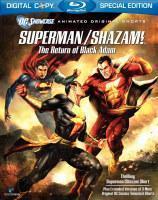 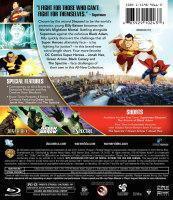 According to various home media retailing outlets and independent research, the recent DC Showcase Animated Original Shorts collection, anchored by the exclusive Superman/Shazam!: The Return Of Black Adam animated short, held tight in its second week of sales, slipping just 50% from its previous week of sales. The release moved an estimated 35,000 DVD copies in its second week, along with an additional 12,000 units in Blu-ray editions in the same timeframe, resulting in an estimated 47,000 home video units sold for the week ending November 21st, 2010. This brings the two week total sales, combining both DVD and Blu-ray sales, to nearly 142,000 units moved.

Sales for direct-to-video animated features, especially titles featuring comic book-based characters, tend to fall an average of 60 – 70% in the second week, but the DC Showcase Animated Original Shorts collection managed to retain a higher numbers of sales in its second week. For comparison, the recent DC Universe Animated Original Movie Superman/Batman: Apocalypse saw a 67% drop in sales for its second week, though has still moved over 500,000 DVD and Blu-ray units since its debut. Note the sales numbers above do not take into account rental numbers, OnDemand numbers, or legal download numbers.

Above is the cover art for all standard definition DVD and high-definition Blu-ray home video releases for the DC Showcase Animated Original Shorts collection. Click on the links below to discuss both the recent Superman/Shazam!: The Return Of Black Adam animated short, exclusive to this new collection, along with the home video release, accompanied additional animated shorts and other topics pertinent to this update.