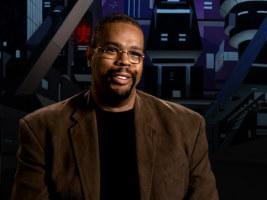 The World’s Finest has learned that animation producer, writer, editor, and comic industry vet Dwayne McDuffie has passed away. He was 49 years old. McDuffie died Monday, February 21st, 2011, a day after his birthday, due to complications after undergoing emergency heart surgery at Providence St. Joseph Medical Center in Burbank, California, said Gary Miereanu, a publicist for Warner Home Video.

McDuffie is remembered for his work with Milestone Media, classic animated television programs including Justice League Unlimited, Static Shock, among many, many others. His most recent projects included the animated series Ben 10 and the just-released All-Star Superman direct-to-video animated feature. A highly influential creator in his field, his work was noted by many others as the high mark to which they aspire to.

This news has hit both his colleagues and the fan community tremendously hard. Other media outlets have also picked up this tragic story. Dwayne McDuffie is survived by his wife.

The World’s Finest would like to express our deepest condolences to his friends and family.