Jeremy Zuckerman recently took time to discuss the work of the acclaimed music and sound design production company The Track Team, which he co-founded in 2004 with Benjamin Wynn, on the recent DC Showcase Animated Original Shorts line from Warner Home Video and DC Entertainment. Zuckerman and Wynn composed the music for the entire series of shorts, just one of their recent many projects in the realm of film and television.

And now, La-La Land Records has just released Original Soundtracks from the DC Showcase Animated Original Shorts on compact disc, collecting The Track Team’s entire works for the direct-to-video shorts. The Limited Edition release is now available through official La-La Land Records website and other online soundtrack specialty stores. Please continue below for the Q & A. 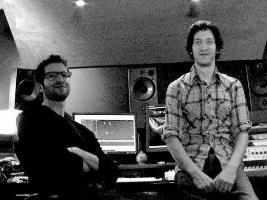 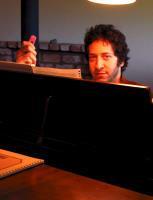 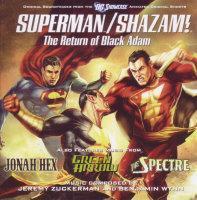 The World’s Finest: First off, care to introduce yourself and some of your past works?

Jeremy Zuckerman: I’ve been working in TV/Film since 2001. My first project came to me via a friend at BMI and was an ambitious short called Radius. Shortly after I began working for a company doing composition, sound design and audio engineering for commercials. After doing some time in the trenches I landed a gig composing the score to the TV series Avatar: The Last Airbender. That turned out to be a really excellent learning experience and really got my TV chops together. Currently, Ben and I are composing the score for the forthcoming TV series Kung Fu Panda: Legends of Awesomeness. Outside of scoring, I’ve recently finished a dance piece for the Scottish Dance Theatre called Khaos; it makes use of traditional instrumentation as well as computer processing.

WF: How did you get on board for DC Showcase Animated Original Shorts. Are you a fan of DC Comics, or comics in general? Any favorite characters, or even comic-inspired animated series?

JZ: Joaquim Dos Santos (the director) brought us in. We had worked with him on the first season of Avatar: The Last Airbender. It was great for us to do a project with Warner Brothers. Really easy company to work with and the people have a lot of integrity.

Growing up I was a superhero nut like most kids. Although I have to admit, I was probably more of a fan of Underoos than comic books!

WF: The majority of these shorts bent more toward some of the lesser-known DC characters, such as The Spectre and Jonah Hex (well, lesser-known to those outside the comic world). Did that make it easier knowing you weren’t slave to anything that came before?

JZ: That’s a really good observation. Yes, it was liberating not having to work from pre-existing musical themes or much aesthetic history in general. We weren’t working with a completely blank slate but a blank state can be stifling. Option paralysis and all that… The parameters that were set in place by Joaquim, Bruce Timm and the little history that did exist, were just enough to get the creative juices flowing.

WF: Each short had a distinct style. The Spectre felt like a 1970s crime film, Jonah Hex a bleak western, and so on. Can you run us through your inspiration for all of the shorts you scored?

JZ: Sure. Joaquim had a very specific idea for the music in The Spectre The Corrigan stuff had an obvious and strong reference to Lalo Schifrin’s brilliant Dirty Harry score. For the Spectre moments we referenced those wonderfully cheesy and effective 80’s synth scores from the John Carpenter and George Romero movies. Jonah Hex was a bit less derivative. Bruce wanted it to sound like a score that Morricone could have written but never did. Morricone was definitely an influence in some of the instrumentation and harmony but we also used some more modern elements and things that were a little outside of the style of the western. We also listened to a bunch of early American frontier music, which informed the fiddle-like violin material. And of there was some good old ragtime piano music for some on screen material. The Spectre and Jonah Hex were the two that were most obviously referential.

WF: As a semi-follow-up to the previous question, was there any short that seemed to be “easier” in terms of scoring than the others? Why?

JZ: I’m a huge fan of 70s funk, as a matter of fact I play guitar in an old school funk ensemble. Also Ben and I both have a strong background in synthesizers and computer music. So The Spectre was a really good fit in that regard. I loved working on that score but strangely enough, I think I was most inspired by the Jonah Hex stuff. The narrative mood was really appealing to me and the themes were very rich in that there were a lot of ways to develop and vary them.

WF: Do you have any favorite moments, both in the actual shorts and your work on them, that you’d like to discuss? Were there any moments where, after watching the finished product for any of the shorts, you felt you just nailed it?

JZ: There are a lot of moments I’m really proud of in these shorts. The lonely cue that supports Jonah’s entrance, the Madame Lorraine violin and guitar music, the montage when Madame Lorraine and Jonah go to the mineshaft… I really like that scene in The Spectre when that dude in the hot rod is fleeing to Mexico. There’s a little synth melody in there that combined with those Linn drum sounds really captures that cheesy, yet stirring quality a lot of film and TV music from 80s possessed. The scene in Shazam where Black Adam snatches the female bystander out of the car and uses her to force Captain Marvel to return to his Billy Batson form really works for me… There are a lot of moments that I really like! What can I say? It was an inspiring project!

WF: Is it a relief to see your work on DC Showcase Animated Original Shorts get an actual CD release, given how the market here in North America tends to difficult toward these type of niche releases?

JZ: To be honest, I don’t know much about the history of the DC Showcase Animated Original Shorts releases. But I will say that I know how hard it can be to get music property released and was amazed at how easy it was with this project. It’s a really unexpected and nice surprise that La-La Land Records wanted to do this. The fact that the music will be heard on it’s own is simultaneously terrifying and gratifying!

WF: To wrap this up, where will we be seeing your work next? Will you be sticking around the DC Comics world in addition to your other works?

JZ: We’d love to work on more projects like the DC Showcase Animated Original Shorts. The niche stuff is really fun for me because there’s a bit more room for experimentation. It felt very fresh…

The next thing of ours you’ll be seeing is our work on Nickelodeon’s new Kung Fu Panda TV series. We’re really getting into Chinese instrumentation on this and are working with some amazing musicians. We’re excited to bring some sounds to American TV that are rarely heard. It’s a great opportunity to combine western scoring styles with some of the incredible beauty of traditional Chinese music.

In the future we both would love the opportunity to work in dramatic feature or dramatic hour-long TV. Ben and I feel that while we love working in animation, we also have a lot to bring to a musical landscape that fits a dramatic narrative.

The World’s Finest would like to thank Jeremy Zuckerman for his participation in this Q & A!

Original Soundtracks from the DC Showcase Animated Original Shorts is now available to order through the official La-La Land Records website, and through other online soundtrack specialty stores. Stay tuned for further updates and coverage here soon at The World’s Finest.

Follow The World’s Finest on Twitter and Facebook!
Latest Issue Of “The All-New Batman: The Brave And The Bold” Comic Now Available New “Young Justice” Title From DC Comics Debuts To High Sales On Comic Charts