The World’s Finest presents the latest in a series of studio-conducted interviews, provided by Warner Home Video, for the Green Lantern: Emerald Knights direct-to-video animated feature. Continue reading below for an interview actress Elisabeth Moss as she discusses the upcoming DC Universe Animated Original Movie title. Additionally, click on the two thumbnails images of Moss directly below for two interview clips of Moss talking about the role. Clicking on other thumbnail images will provide a closer look at each. 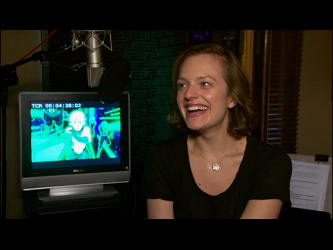 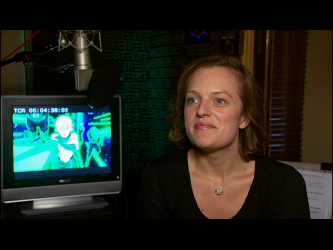 Long before she caught the TV viewing worlds attention as Peggy Olsson in AMCs hit series Mad Men, Moss stood before a microphone to give voice to characters in such landmark series as Batman: The Animated Series and Steven Spielberg Presents Animaniacs, as well as the animated holiday special Frosty Returns.

Moss continued working in animation with roles in series and specials like Freakazoid! and Its Spring Training, Charlie Brown! as her on-screen career began to blossom, eventually stepping away from voiceovers to act in a succession of popular series, most notably The West Wing, Invasion and Picket Fences.

Now Moss has undertaken the task of bringing to animated life Arisia, a young recruit forced into her first mission on just her third day as a Green Lantern. Produced by Warner Premiere, DC Entertainment and Warner Bros. Animation, and distributed by Warner Home Video, Green Lantern: Emerald Knights weaves six legendary stories of the Green Lantern Corps rich mythology around preparations for an attack by an ancient enemy. As the battle approaches, Hal Jordan (voiced by Castles Nathan Fillion) mentors Arisia in the history of the Green Lantern Corps, telling tales of Avra (the first Green Lantern) and several of Hals comrades including Kilowog, Abin Sur, Laira and Mogo. In the end, Arisia must rise to the occasion to help Hal, Sinestro and the entire Green Lantern Corps save the universe from the destructive forces of Krona.

Recording her lines on a day off from the Mad Men set, Moss had time for a few questions about her role, working in animation, and the importance of great footwear.

ELISABETH MOSS: Its sort of Arisias first day on the job, so theres a huge learning curve for her. Shes just been basically plucked out of class on her home planet and thrown into this intergalactic police force just as the universe is under attack. So its all very overwhelming for her. But shes smart and courageous, so she rises to the occasion.

QUESTION: You get years to develop your character on shows like Mad Men and The West Wing. Was it difficult to have just one day in Arisias shoes?

ELISABETH MOSS: Well, I really love Arisias boots theyre very cool, I like their style so I like being in her shoes (she laughs). Animation is great because youre part of a large team effort. Im only required to provide my voice for a single character, and to act that role while the director and writers and animators create the entire story. So its fun to see that all come together, especially to see an animated sort-of version of yourself.

QUESTION: What was it about Arisia that attracted you to the character?

ELISABETH MOSS: I like that shes strong, and at the same time shes a pretty girl. But she really adapts well to her first day on the job, and she has a lot of responsibility. I think shes a nice, strong female character.

QUESTION: Youve been away from animation for many years. What prompted the return?

Ive always wanted to do more animation. I think its a really fun job; Obviously, it has a certain ease to it, but at the same time it can be difficult. Theres technical things that Im not very good at or that Im just learning, things about your voice and making clicking sounds and (using) the headphones but its fun to learn and its definitely something Id like to get to do more of.

QUESTION: Do you find animation is more liberating than on-screen acting?

ELISABETH MOSS: Whats liberating about animation is that you can show up in your jeans and t-shirt and not worry about make-up or hair style. You can show up in your pajamas if you want. Thats tremendously liberating, as opposed to going through three hours of hair and make-up before going before the camera for my day job. So its much more relaxing.

QUESTION: So youd like to do more voiceovers. Are you seeking any particular roles?

ELISABETH MOSS: Im not familiar enough with all the comic book characters to choose. Im just happy to be asked to do anything. I couldnt necessarily pick one I would just like to be involved with whatever somebody thought I was suitable for.