Today sees the release of the new Justice League: Season Two Blu-ray title from Warner Home Video, collecting the entire 26-episode second season of the classic Cartoon Network animated series. In addition to 26 episodes, the two-disc high-definition release also includes commentaries, featurettes, and trailers, including the all-new featurette “The Justice Lords and Beyond.” Further artwork and details are below. 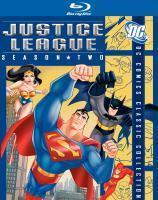 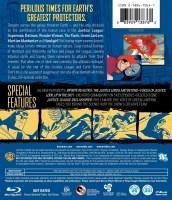 Description:
Superman, Batman, Wonder Woman, The Flash, Green Lantern, Martian Manhunter and Hawkgirl – they have all used their unique powers to fight evil across the galaxy. These seven super heroes unite to become the Justice League. Dangers across the galaxy threaten Deep-rooted feelings of mistrust and insecurity surface and plague the Justice League, causing internal strife and leaving them vulnerable to attacks from their enemies. But when one of their own commits the ultimate betrayal, it could be the end of the Justice League and Earth forever!

Extras Include:
-All-New Featurette: The Justice Lords and Beyond An in-depth exploration of the alternate reality concept, the use of this physical theory in the DC Comics Universe and the alternate Earth created in the fan-favorite Justice League episode A Better World.
-Featurette: “Justice League: Declassified” Actor Phil LaMarr (the voice of John Stewart/Green Lantern) takes you behind the scenes with the show’s creative team.
-Easter Egg: “Not Too Savage” A never-before-seen deleted scene with an introduction by producer Bruce Timm.
-Commentary on Three Key Episodes: Twilight, Part II, A Better World, Part II and Starcrossed, Part III — Producers Bruce Timm and James Tucker, director Butch Lukic and the late writer/story editor Dwayne McDuffie provide fans with keen behind-the-scenes insight on three important episodes.
-Trailers

Justice League: Season Two, on sale for the suggested retail price of $39.99, is available at all retail and online retailers. Click here for a review and further details on this Blu-ray home video release.