Young Justice comic series artist Christopher Jones provides The World’s Finest with a closer look at Young Justice issue #7, the latest issue of the monthly series published by DC Comics. Below, Jones breaks down the issue, providing his thoughts and taking a looking closer at certain aspects of the issue. Click on the thumbnails for a closer look at each image. Young Justice #7 is now available both in print and digitally.

I’ve been really anxious for people to see this one, because this is the issue where you really start to get a sense of how vital a role the comic is going to play in fleshing out these characters and this world. It’s really exiting stuff if you’re a fan of the show.

Page #2: The “27 / Bludhaven” route information on the bus was my contribution. Bludhaven was a way of further indicating that Artemis isn’t in the nicest part of town, although this might not literally be Bludhaven. That’s just part of this bus’s route. The 27 is a reference to Detective Comics #27. It’s a number that I drop into anything Batman/Gotham related a lot.

Page #4: Here’s where we hint that Artemis has a sister who is actually Wonder Woman. No, wait…

Page #6: It was interesting finding ways to conceal the face of Artemis’ father. The way his head goes off the top of the panel on this page is something you’d never ordinarily do, but here it works. Note Artemis’ bare feet in panel one. Her boots are on the floor by her bed on page 04!

Page #7: I really liked this page. On a book like this you want to keep the art fairly simple and clean so you don’t want to go crazy with shadows on faces, but here was a great opportunity to use lighting not only for mood, but to give animation design faces a greater sense of weight and form in close-up than they might otherwise have.

Page #10: We went back and fourth a couple of times getting these thugs to look right. The script called for them to look big and tough – I guess so they looked like formidable opponents for Artemis rather than strung out punks who you might expect to be knocking over a low-end liquor store. But apparently my first pass on their ski-masks made them look to super-villain-y. I revised their masks to be even more rumpled and ill-fitting, and that seemed to make everyone happy. The thug with the shotgun was drawn to have bare arms, but a watchband got interpreted as a sleeve cuff and he ended up wearing a long sleeve undershirt in the finished art.

Page #13: I always wanted to do a spoof of the TV show cops set in Gotham. It would have consisted of an evening of following Gotham patrolmen around encountering stuff that was way over their head, or finding criminals tied up and left for them as Batman or some other Gotham hero is fleetingly spotted like a Bigfoot sighting. 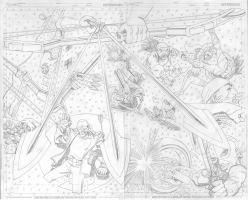 Pages #14/15: The script called for a montage without panel orders. The motif of the arrows to help break up the layout was my idea. “No panel borders” is challenging enough when it’s just figures, but when you have to show a hit of a location or a scene to give those figures context, that’s tricky without creating panel boards of some kind. For those who enjoyed this spread, keep your eye out for similar sequences coming in issue #09!

Page #17: The sequence of Artemis climbing the tree was scripted as multiple panels, and I thought having multiple figures over a continuous background image opened up the visuals and gave the page more flow.

Pages #18/19: I didn’t get to do many full-page shots let along double page spreads during my days on The Batman Strikes, so epic shots like this are a treat. The challenge here was finding an angle on the action that reflected what was seen in the “Schooled” episode of the TV show, but also placed the characters to work with the order in which they were mentioned in the scripted dialog. This is the kind of thing that takes a lot of care when planning the artwork for a comic and isn’t that apparently when looking at the finished product!

Pages #20: Here we go. Lots of MONQI droids. By the end of issue #08, I’ve drawn enough of these guys to last me for a looong time! But you’ll have to check that out in a month’s time!

The World’s Finest would like to thank Christopher Jones for his participation and taking the time to do this special breakdown!