THE ALL-NEW BATMAN: THE BRAVE AND THE BOLD #14

Join the Caped Crusader for a special holiday story. Chanukah is coming, but constant struggles against injustice in Gothams worst slum can wear anyone down even the heroic Ragman! Can Batman restore his allys faith in justice…and his faith in himself?

Click here for updated comic guides and further details and on the Batman: The Brave and The Bold comic series.

Details for the December 2011 issue of Young Justice, the DC Comics title based on the acclaimed Cartoon Network animated series of the same name, can be found below. The Young Justice comic series expands on the continuity of the hit animated series, telling stories taking place between episodes of the top-rated cartoon. Stories from both the animated series and comic title will directly tie into each other. Cover art is also available by clicking the thumbnail.

The spotlight turns to Robin, who must leave his teammates to fight alongside his crimefighting mentor, Batman. And the stakes couldnt be higher for the Dynamic Duo as they face off against the Demons Head himself: Ras al Ghul!

Young Justice features work by the creative team of artist Christopher Jones and writers Greg Weisman and Kevin Hopps. Weisman is one of the producers for the Young Justice animated series, and Hopps a regular fixture in of the show’s creative team.

DC Comics has also advanced-solicited the first Young Justice trade release, collecting the first seven issues of the series, for a January 2012 release. Details on the trade release can be found here.

Finally, DC Comics has released details on a new DC Direct product slated to tie into the upcoming Green Lantern: The Animated Series program coming to Cartoon Network. Details are as follows below. 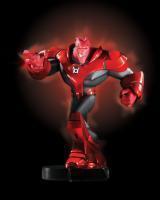 Standing an impressive 8.25 high x 8 wide x 6 deep, no collection can be complete without this fearsome foe!

Stay tuned for further updates here soon – including new developments for Batman: The Brave and The Bold, Young Justice, and Green Lantern: The Animated Series – at The World’s Finest.