The World’s Finest caught up with Batman: The Brave and The Bold Producer James Tucker to discuss the latest episode of the acclaimed animated series, “Crisis 22,300 Miles Above Earth!” The all-new episode debuts Friday, October 28th, 2011 at 7:00pm (ET) on Cartoon Network. The episode airs after a special presentation of the The Batman Versus Dracula animated feature, airing from 5:00pm to 7:00pm on the same network. The episode features the Justice League International, the Justice Society of America, and the return of Ra’s Al Ghul. Continue below for the all-new exclusive Batman: The Brave and The Bold Q & A with Tucker.

The World’s Finest: First up the teaser. Batman is the victim of a comedy roast from his deadliest enemies. Can you expand upon your inspiration for this teaser, and the inclusion of comedian Jeffery Ross? Would you have liked to have done an entire episode dedicated to…roasting Batman?

James Tucker: I believe Michael Jelenic wanted to do the teaser that took place at a Roast. I liked the idea but my original concept was to make it more like the old Dean Martin Roasts that I watched as a kid. I really hadnt watched the current version of this thats waaaay more risque on cable TV. Anyway, Michael Goguen, the director of this episode, kind of fused the old and new roasts into what was in the episode. We ended up with Jeffery Ross as the host because, fortunately, he was friends with John DiMaggio! It worked out great, and Jeffery even brought some of his own jokes to pepper his routine with. Im not sure that anyone would want a whole episode dedicated to Batman getting roasted however. At least, I know I wouldnt.

WF: To the episode itself, it features the JLI and the JSA coming together…but not exactly seeing eye to eye. There seems to be a generation gap between the two group of heroes. An you expand upon this approach used, the inability for the two groups to properly get along?

JT: We wanted to do a JLI/JSA team-up from the first season but there never seemed to be a good place for it since we had to introduce both groups in separate episodes for a team up to make any sense. The idea of using the setting a party going wrong really appealed to us because we got to play up the idea that the JSA doesnt really like this new League made up of loose cannons. It also offered an opportunity to touch on the comparisons to the original Justice League that disbanded for reasons weve never touched on. It wasnt the typical JL/JSA story I envisioned in the earlier seasons but I think this ended up being a lot more fun overall.

WF: As a semi-follow-up to the first question, is it safe to say that some of this episode is influenced by the annual JSA/JLA crossovers that DC Comics used to publish?

JT: Yes, I wanted it to be reminiscent of those old Justice League comics where once a year, the Justice League and the Justice Society met and had a mixer and something always went wrong and theyd have to join forces to face some crisis. But in this case we thought that the crisis would be the mixer itself, not some actual universe threatening event. I always looked forward to those issues where the JLA and the JSA teamed up but the part that always interested me wasnt the actual adventure but the small talk that would take place at the beginning of the story when the guests arrive and the heroes would talk shop so thats a lot of what the episode was about and about the JSA not approving of this new version of the Justice League. We solved the problem of not having enough action in it by cross cutting to Batman on a life threatening adventure, but trying to get to the party in time.

WF: Is there any era specifically that you drew the most influence from for the JSA? Are there any JSA stories you wish you had the opportunity to touch upon for the series?

JT: The era Im most familiar with is of course the version I was introduced to as a kid reading comics. So, whatever the line up was during the bronze age of DC Comics is what I gravitate toward. Of course, because in our series, there is no Earth 2, we had to make compromises along the way as we were setting up both groups. But I liked the idea that, in our series, Batman and Superman werent the first superheroes, but the Justice Society existed before both of them. I liked the idea of the current heroes having been mentored by older heroes. There arent any actual JSA stories that spring to mind that Id like to adapt though. Its the concept of the JSA that seemed to attract me more than any of their actual adventures, though it would have been nice to have a story pitting them against more of their rogues like , Vandal Savage, Brain Wave, and the Injustice Society.

WF: This episode also brings back Ras Al Ghul to the series, and he gets a bit of a spotlight (including a surprising moment or two). Can you run us through the Batman: The Brave and The Bold interpretation of Ras al Ghul and how he may differ from other version weve seen in the past?

JT: There isnt really much difference between our shows version of Ras and any other version really. Same character, just made more of a mustache twirling villain in our show than in other interpretations. I liked the idea of pushing his connections as basically Batmans version of a James Bond villain. To me, he works best as the Fu Manchu/Dr. No/Goldfinger type villain he started out as. He doesnt really fit in with any of Batmans other villains. So we played up the Bond-like elements a lot in this episode from the ski chase at the beginning to the use of a John Barry-inspired score. I do wish we had at least one Lazarus Pit sequence in the series. Seeing Ras go insane with power is always fun!

WF: As per always, we bring this Q & A to a close with the standard capper why should fans check out this new episode on Friday?

JT: Fans can expect the return of both the JSA and Ras al Ghul, as well as the first ever appearance on the series of the Alan Scott Green Lantern. That should be enough to get anyone inspired to watch!

Batman: The Brave and The Bold airs on Cartoon Network every Friday at 7:00pm (ET), with the next new episode “Four-Star Spectacular!” airing November 4th, 2011 at 7:00pm (ET) on Cartoon Network. Please note that Young Justice will be pre-empted this Friday, October 28th, 2011, due to the special airing of the animated feature The Batman Versus Dracula. Click here for more details on the feature.

Warner Bros. Interactive Entertainment and DC Entertainment today released a new trailer for the acclaimed Batman: Arkham City video game. The trailer promotes the upcoming downloadable content featuring Nightwing. Batman: Arkham City is currently available on Xbox360 and Playstation3. Click on the thumbnail below to view the footage in the Quicktime format, along with additional press details for the release. 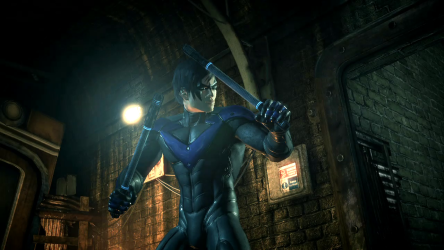 Featuring the intense melee skills of Nightwing, a.k.a Dick Grayson, the trailer showcases the characters punishing arsenal of fighting moves that can be used against Arkham Citys hardened thugs. Nightwing comes complete with his own unique gadgets and special moves, and is playable in all challenge maps in the game, as well as two additional challenge maps that are included with the pack: Wayne Manor and Main Hall. The pack also contains a bonus Animated Series Nightwing character skin.

Batman: Arkham City is out now for the Xbox 360 and PlayStation 3 and has already received universal praise from critics and fans alike. The PC version will be available beginning November 15.

Kevin Conroy and Mark Hamill reprise their respective roles as Batman and Joker in Batman: Arkham City, the highly-anticipated sequel to the critically acclaimed Batman: Arkham Asylum video game, along with Emmy Award-winning Batman writer Paul Dini again penning the story. Click here for more content from the Batman: Arkham City video game. To discuss the new video game below, please click on the links below.