Batman: The Brave and The Bold DC Animated Series Interviews

The World’s Finest caught up with Batman: The Brave and The Bold Producer James Tucker to discuss the latest episode of the acclaimed animated series, “Bold Beginnings!” The all-new episode debuts tonight, Friday, October 14th, 2011 at 7:00pm (ET) on Cartoon Network. The episode brings together Batman, Aquaman, Green Arrow, and Plastic Man and features a series of flashbacks. Continue below for the all-new exclusive Batman: The Brave and The Bold Q & A with Tucker. 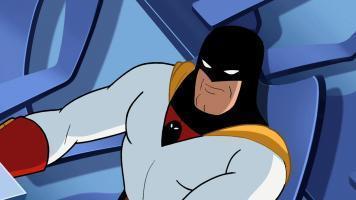 The World’s Finest: Right off the bat Space Ghost! How did this teaser come about? Why Space Ghost? Is this the first non-DC Comics character to appear on the series?

James Tucker: The whole idea for having teasers at the beginning of the show came from my love of those Hanna-Barbera superhero shows from the late 1960s that were divided into multiple shorts like Space Ghost, Birdman, Mightor, The Galaxy Trio, and so on. Space Ghost was the best of them and I always had a fondness for the character and he seemed the most on par with our Batman. After our episode with Scooby-Doo, we figured everythings open game for the show.

WF: To the main story. Why were these particular heroes chosen Green Arrow, Plastic Man and Aquaman? Does this tie in with how they were considered regulars during the first season?

JT: This story actually started out as a DTV (direct-to-video movie) script written years ago that was to feature the Batman: The Animated Series-version of Batman in a The Brave and the Bold-type movie featuring three segments consisting of Batman teaming up with Elongated Man, Green Arrow and Zatanna written by Paul Dini and Alan Burnett. Id place it around the time of Batman: Mystery of the Batwoman, either right before or right after, I dont recall. For whatever reason the script didnt get produced and it sat on the shelf for years. Fast forward to our third season. We were a bit behind of getting in a finished script for our deadline and had gotten a hold of the script for the aborted DTV. We took two of the segments and adapted them to what became the Green Arrow and Plastic Man (formerly Elongated Man) segments in the episode. Steve Melching wrote the rest of the episode and did a great job of condensing those segments and creating a great framing device using Aquamans thwarted efforts at telling his story. I thought the episode turned out well, especially given considering its convoluted path from a 75 minute DTV to a 22-minute TV show.

WF: As a semi-follow-up to the previous question, are there any other characters you wouldve like to have created a first adventure with Batman story for?

JT: Ive never thought about what other characters Id want to do a first episode with. Obviously Aquaman, Plastic Man and Green Arrow worked out well because they each have a different relationship to Batman and they were also some of the most regular cast members we have on the show. I suppose if we had the time and another season, it would have been fun to show the first meeting with Superman and Wonder Woman. One of the aspects I loved about this show was the liberal use of flashbacks wed use to show the earlier stages of Batmans career, so that would have been fun to do.

WF: Batman: The Brave and The Bold revisits Batmans past a few times over the course of the series. What is the interest in going back to the early days of the Caped Crusaders career? Is there anything you try to avoid doing when looking back?

JT: I may have answered some of this question in the last response, but for me going back into Batmans past was always a way to show earlier versions of Batman that I knew from the comics into one long continuity. Generally, I hate continuity, but I have always had this wish to tie the earliest versions of Batman with the most current Batman because to me its all the same character. I dont fragment the character to prefer one era over another. So yes, our Batman probably did carry a gun in his first adventure, but he also was the one who time traveled and went to different planets and got superpowers and had a 5th Dimension Imp stalk him. Hes also the same Batman who had tiny ears and then impossibly long ears. He was the superhero and he was the detective. Hes all the same character in all those iterations. Its all Batman, so using flashbacks was my way of incorporating these different aspects of Batman into one ‘universe.’ 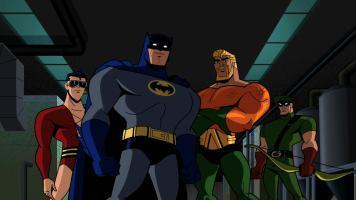 WF: Green Arrow, Plastic Man and Aquaman find themselves in a rather chilly situation, facing off against Mr. Freeze. Why was this villain chosen? Additionally, both Mr. Zero and Mr. Freeze appeared on this series as separate characters, but didnt they end up the same villain (Mr. Freeze) in the comics? Why change that here?

JT: Actually, Mr. Zero and Mr. Freeze are the same character in the series. He just became Mr. Freeze between seasons. I dont believe theres anything that would contradict that in the show but admittedly on a show like this with so many characters to juggle, there are bound to be slips. But we always assumed Mr. Zero became Mr. Freeze. I didnt realize there was any confusion on that point.

WF: There were some particular design choices used in the flashbacks, such as Batmans original costume and a beardless Aquaman. How many designs do characters usually go through before a final one is settled upon, be it in this episode or any episode?

JT: There is no set rule. We were always tweaking designs on this show because we were always trying to up our game all the way up to the end of the series. Sometimes it seems just as we finally think weve figured out the show, its almost over. As for different versions of Batman to use, I just wanted to incorporate all the different versions of the character whenever it was appropriate. As for designs, it takes me a long time to settle on one character design when Im doing the designing. I do a lot of drawing if time allows. Sometimes it only takes a few tries though. I tended to use the actual source material and wanted to draw the characters as close to their original style as possible. So characters like the Shazam family, Doom Patrol, Spectre, etc. were pretty faithful to their original comic book looks. There was no reason to change them.

WF: Lastly, is there anything else you can tell us about ‘Bold Beginnings,’ set to debut tonight on Cartoon Network?

JT: As usual, I think this turned out to be a fun episode that allows the audience to see Batman through the eyes of his closest friends, and was a fun change of pace for our series. Also, you cant go wrong with a Space Ghost teaser! 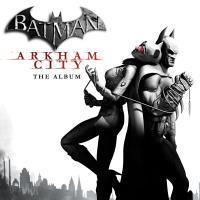 To enter, simply send an email to bbeyond@yahoo.com, including your name, full mailing address and phone number by 12:00 midnight tonight (ET), October 14th, 2011. Please label the email “Batman: Arkham City CD Contest.” Only one entry per person, per household will be accepted. From there, ten entries will be randomly selected to receive a free copy of the Batman: Arkham City – The Album CD release from WaterTower Music. Please note this special giveaway is only available to residents of the United States. Only those randomly chosen to receive a copy of the CD release will be notified via email shortly after the closure of the contest. Please note the terms and conditions of this special giveaway are subject to change without notice.

Continuing, Warner Bros. Interactive Entertainment and DC Entertainment today released a new trailer for the upcoming Batman: Arkham City video game. The trailer focuses on assorted villains who will plague the Dark Knight in the highly-anticipated video game. Batman: Arkham City will be available October 18th, 2011 in North America for Xbox 360 video game and entertainment system from Microsoft, Games for Windows PC and the PlayStation3 computer entertainment system. Click on the thumbnail below to view the footage in the Quicktime format, along with additional press details for the title. 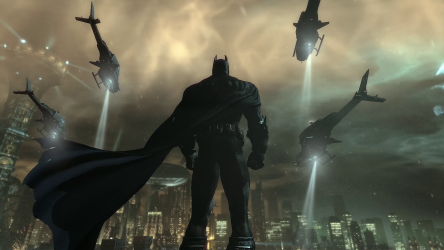 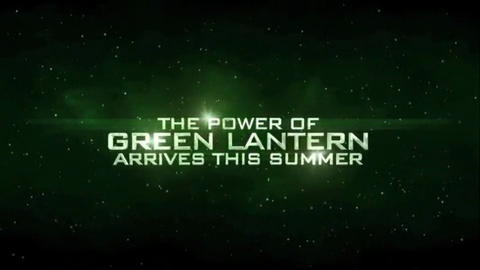 The Canadian retail chain Future Shop will be selling an exclusive Steelbook Blu-ray release of Green Lantern, featuring collectible artwork, for $27.99CAN.