The change in trade dress is part of the rebranding efforts by DC Entertainment, announced back in January 2012. The recent rebranding is part of the companys mission to fully realize the value of its portfolio of brands, stories and characters, distinguished by incredible breadth and depth across publishing, media and merchandise. The new branding started appearing on comic books and graphic novels as of March 2012, the same time as the launch of the DC Nation programming block on Cartoon Network, and is starting to touch upon different consumer products. The new branding will be rolled out over time on other DC Entertainment products from Warner Bros. – including film, television, interactive games and merchandise – with complete saturation before the end of 2012.

The DC Universe Animated Original Movie line was launched in 2007 with Superman/Doomsday, and has since seen a wide selection of home video and soundtrack releases under the banner. Five years later, the line continues to be a profitable endeavor for Warner Home Video. Any currently available home video artwork for Superman Versus The Elite will be modified with the new DC Comics Premiere Movie trade dress, and any significantly re-released titles will be fitted with the new trade dress.

Warner Bros. Interactive Entertainment have issued a press release announcing the new Batman: Arkham City – Game of the Year Edition release. The video game will be available in North America on May 29th, 2012 for the Xbox 360 and PlayStation 3. Click on the thumbnail below to view the trailer in the Quicktime format, along with additional images and press details for the release. 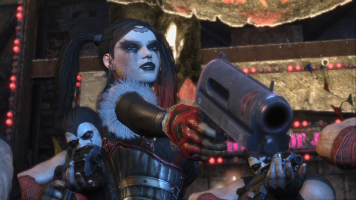 Warner Bros. Interactive Entertainment and DC Entertainment today announced Batman: Arkham City – Game of the Year Edition. The expanded version of the award-winning blockbuster videogame developed by Rocksteady Studios is scheduled for release in North America starting May 29, and in Europe, Australia and other global territories in September, for the Xbox 360 video game and entertainment system from Microsoft and PlayStation3 computer entertainment system.

Batman: Arkham City is one of the highest reviewed titles of 2011 and with the release of the Batman: Arkham City – Game of the Year Edition, fans can extend the multi-award winning experience as the Dark Knight with Harley Quinns Revenge, the final chapter in Batman: Arkham City that adds more than two hours of original gameplay to the critically-acclaimed interactive title. Also included on disc will be all five previously released downloadable content (DLC) packs, as well as a Batman: Year One movie download *(restrictions apply).

Fans who already own an original boxed edition of Batman: Arkham City can experience the new gameplay by downloading the Harley Quinns Revenge Pack, which will be available beginning May 29 in the PlayStationNetwork and in the Xbox LIVE Marketplace for Xbox 360.

The Harley Quinns Revenge mission sends players back into Arkham City to face their final challenge as they interchange between playing as both Batman and Robin. Gamers must utilize each of the characters’ unique combat and investigative skills to uncover Harley’s vengeful plan and shut the gates on the urban mega-prison forever. In addition to experiencing a new storyline, fans can explore new environments and face-off against Harleys all new gang of thugs.

Batman: Arkham City builds upon the intense, atmospheric foundation of Batman: Arkham Asylum, sending players flying through the expansive Arkham City five times larger than the game world in Batman: Arkham Asylum the new maximum security home for all of Gotham Citys thugs, gangsters and insane criminal masterminds. Featuring an incredible Rogues Gallery of Gotham Citys most dangerous criminals including Catwoman, The Joker, The Riddler, Two-Face, Harley Quinn, The Penguin, Mr. Freeze and many others, the game allows players to genuinely experience what it feels like to be The Dark Knight delivering justice on the streets of Gotham City.

Batman: Arkham City – Game of the Year Edition is based on DC Comics core Batman license and rated T for Teen by the ESRB. Fans can visit www.batmanarkhamcity.com for more information about the game.

Batman: Year One Movie Download* (restrictions apply) offer expires March 31, 2013. Internet connection required. Offer available only through Xbox LIVE or PlayStationNetwork. Must be 13 years or older to redeem offer. Offer good in the United States and Canada only.

About Rocksteady Studios Ltd
Rocksteady Studios is a multi-award winning videogame developer based in London, England. Located in a spacious, purpose built converted factory, with full motion capture and audio studio capabilities, Rocksteady is an energetic company formed by a core team of senior industry professionals. This creates an ideal balance of drive, talent, proven methods, experience and cutting edge technology to make AAA games. Now employing over 90 people, Rocksteady’s mission is to be a highly professional, efficient company whose purpose is to make great games, and have happy and healthy team members. This philosophy is the heart and soul of the company. Rocksteady received the coveted studio of the year award at the 2009 VGA awards.

Click here for more content from the Batman: Arkham City video game. Batman: Arkham City – Game of the Year Edition, the expanded version of the award-winning blockbuster videogame developed by Rocksteady Studios, is scheduled for release in North America starting May 29th,2012 and in Europe, Australia and other global territories in September 2012, for the Xbox 360 video game and entertainment system from Microsoft and PlayStation3 computer entertainment system. To discuss the new video game below, please click on the links below.