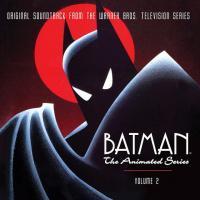 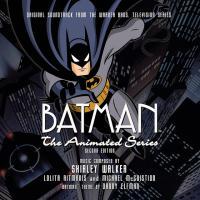 BATMAN THE ANIMATED SERIES: VOL 1 (Second Edition)
Back by popular demand, La-La Land has re-issued its 2008 sold-out title for the legions of BTAS fans who missed out on this dynamite release’s initial debut. This “second edition” re-issue is virtually identical to the 2008 version, except the bonus tracks “Gotham City Overture” and “Music of the Bat” have been removed to preserve the integrity of the initial release. Get it before it sells out – again! Limited Edition of 5000 Units. Comic Con price $25

Our COMIC CON titles will be exclusively available July 12-15th (and on Preview Night July 11) at Comic Con from La-La Land Records (Booth 429 “Toy Hungry”). All four titles will subsequently be released at www.lalalarecords.com (and other online soundtrack boutiques) on July 19th, 1pm PST. In addition to these wonderful new releases, La-La Land will be offering at its Comic Con booth (#429 “Toy Hungry”) the usual assortment of exciting soundtrack titles, with many worthwhile specials and deals to be had.

La-La Land Record will also debut expanded scores to the theatrical films X2: X-Men United and The Phantom during San Diego Comic-Con 2012, as well as discuss upcoming titles from the label, including the score release of Green Lantern: The Animated Series.

Comic-Con International returns to the San Diego Convention Center on July 12th – 15th, 2012, with Preview Night on July 11th. The convention is held every year, focusing on host of different genres and pop culture events. Further convention schedule details can be found at the official San Diego Comic-Con website.

Batman: The Animated Series – Original Soundtrack From The Warner Bros. Television Series, Volume Two will be exclusively available from July 11-15th, 2012 at San Diego Comic-Con courtesy of La-La Land Records at Booth 429, before going wide at 1pm (PT) on July 19th, 2012 through the label’s official website and specialty outlets.