James HarveySuperman vs. The Elite sales 0 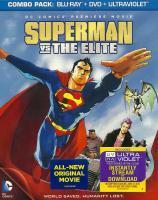 According to various home media retailing outlets and independent research, the recent Superman Versus The Elite direct-to-video animated feature made a serviceable debut on the home video market. The latest DC Universe Animated Original Movie title moved an estimated 131,500 units in its first week, with 42,500 of those sales coming from DVD and 89,000 from the Blu-ray format. Blu-ray sales accounted for an estimated 68% of total Superman Versus The Elite home video sales in its first week, with the high-definition format easily the dominant media. These sales numbers are for the week ending June 17th, 2012, the first week of the availability for the animated title. Keep in mind the sales numbers above do not take into account rental numbers, OnDemand numbers, or legal download numbers. Additionally, please note that the Superman Versus The Elite Two-Disc Special Edition release is currently exclusive to all Wal-Mart chains, though will go retail wide come July 24th, 2012.