The World’s Finest presents new media and a studio-conducted interview, provided by Warner Home Video, for the Batman: The Dark Knight Returns, Part One direct-to-video animated feature. Continue reading below for an interview with Ariel Winter, who voices Robin in the upcoming DC Universe Animated Original Movies title. Batman: The Dark Knight Returns, Part One arrives tomorrow, September 25, 2012 from Warner Home Video as a Blu-ray™ Combo Pack and DVD, On Demand and for Download. Also available is a new Robin-centric clip from the animated feature and a series of new stills. The first thumbnail below leads to the Quicktime/MP4 clip, the remainder to stills. 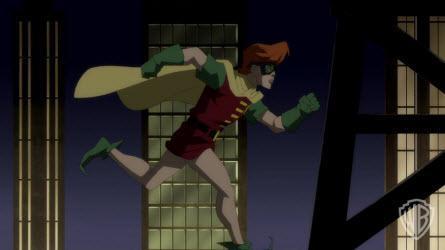 It’s going to be a whirlwind 24 hours for Ariel Winter.

Sunday night, the young actress was on stage at the Emmy Awards along with her cast of Modern Family to claim the prize for Outstanding Comedy Series, and tonight she’ll be walking the red carpet at the premiere of her new animated film, Batman: The Dark Knight Returns, Part 1.

Now in her fourth season as Alex Dunphy on Modern Family, Winter has already carved out quite a career in her brief 14 years. On the big screen, Winter has been seen in films as varied as One Missed Called, Speed Racer, Kiss Kiss Bang Bang and A Thousand Words. Anchored by a recurring role as Lucy Moore on ER, Winter’s television career includes guest roles on Criminal Minds, Nip/Tuck, Monk, Jericho, Bones, Crossing Jordan and The Ghost Whisperer.

Batman: The Dark Knight Returns, Part 1 represents Winter’s second foray into animated DCU entertainment. Winter provided the voice of the savvy 10-year-old Princess Perdita of Vlatava, whom Oliver Queen races to protect in the DC Universe Animated Original Short, Green Arrow. She reprised the role for an episode of Young Justice. She has been particularly active in animation, providing voices for films such as ParaNorman, Ice Age: The Meltdown, Over the Hedge and Cloudy With a Chance of Meatballs, and TV series like Phineas and Ferb and The Penguins of Madagascar.

In many ways, Winter is a spunky teenager with equal amounts of smarts and sass. She is honest at every turn. So you know her answers were fun when we sat down to discuss Batman: The Dark Knight Returns, Part 1 …

QUESTION: Imagining many of your fans are experiencing Batman: The Dark Knight Returns for the first time, describe your character Carrie Kelly’s place in the story.

ARIEL WINTER: Carrie is sort of a street kind of gangster girl who lives in this shady part of Gotham City. She’s always dreamed to meet her hero, Batman. One day she’s walking with her friend Michelle, and they get mugged by the Mutants – but Batman saves her. So she then sets out to be Batman’s partner in crime, er, crime-fighting. And eventually, she succeeds and becomes Robin.

QUESTION: How do you see Carrie’s sense of Batman?

ARIEL WINTER: I think Carrie feels super ecstatic when Batman includes her in his little facade of Batman and Robin. She feels so honored – it’s a really big deal for her. I think she’s not really not just a crime fighter, though – she’s kind of like his daughter. She really cares for him, and he really cares for her. They’re like family.

QUESTION: Are there similarities between Ariel Winter and Carrie Kelly, and how did that help/hinder getting into character?

It wasn’t really hard getting into Carrie’s mindset because I’ve always wanted to play the sort of Tomb Raider, Kick-Ass role where the girl is really the brains behind the power. So I was excited when I got to do it. I just devoured the script. I was surprised. It was pretty violent. I read it and I saw some of the things and I was like, “Woah! That is so cool.” I’m a big fan of that action, thriller sort of thing, so it was exciting for me to read.

QUESTION: How important to you is being the first female Robin?

ARIEL WINTER: It’s really cool to be the first female animated Robin. There’s been so many amazing boys, but I think I can just bring something new that the fans have never experienced. So I’m really honored to be part of such a fantastic project.

Female empowerment really is important to me. I’m a big nerd of the books from the 15th Century and 16th Century, when the men had all the power and the women had none of it. So to have Robin be a girl is cool because it gives girls a chance to know that they can do everything boys can do, and even better. No offense (laughs), but it’s true.

QUESTION: Are you into comic books?

ARIEL WINTER: I’m an avid reader, so anything I can read is awesome. I go into comics stores and I can be in there for hours. It’s truly amazing when you open a comic book, because you’re immediately sucked in from the first line. The writing, the graphics, the artwork – it makes you feel like you’re inside the story.

QUESTION: You’re 14 and acting all the time. How do you balance acting with education?

ARIEL WINTER:
You have to be really smart to be an actor. It’s not just saying lines. You have to know the thoughts behind each line, to know what you’re saying. So I think it’s very important to get an education. And I won’t be going to college for acting or film school – I will probably go to college for medical research because it’s something that really interests me. I always tell kids that you’ve got to have something else to fall back on. Acting is my first love – I hope I can do it for the rest of my life. But I’m going to go to college and get a degree in something else. I really feel school is important.

The above content is also available to view at the The World’s Finest Batman: The Dark Knight Returns, Part One subsite.

A review of the Batman: The Dark Knight Returns, Part One animated feature is available to view at The World’s Finest. Please click here to read the review, and stay tuned for additional coverage on the title coming very soon.