The World’s Finest presents a new studio-conducted interview, provided by Warner Home Video, for the Batman: The Dark Knight Returns, Part One direct-to-video animated feature. Continue reading below for an interview with David Selby, who voices James Gordon in the upcoming DC Universe Animated Original Movies title. Batman: The Dark Knight Returns, Part One arrives September 25, 2012 from Warner Home Video as a Blu-ray™ Combo Pack and DVD, On Demand and for Download. Please note the thumbnails below lead to high-res images from the upcoming animated feature.

Having made his mark as a villain for many of his 45 years in the entertainment industry, David Selby is only too happy to provide the heroic voice of Commissioner James Gordon for Batman: The Dark Knight Returns, Part One.

Selby is best known for his long-running roles as Quentin Collins, the werewolf brother to vampire Barnabus Collins on the original series Dark Shadows, and as the ruthless, vengeful Richard Channing on the 1980s primetime soap opera Falcon Crest. Between those two series alone, Selby logged more than 500 episodes as an antagonist.

Finally, Selby gets a beloved protagonist turn as the everyman hero James Gordon, a straight-shooting, intelligent lawman bent on doing what’s right … with the help of his old pal, Bruce Wayne (and his alter ego, Batman).

Selby will be in attendance on both coasts for the World and West Coast Premieres of Batman: The Dark Knight Returns, Part One. Selby is the lone actor on the September 20 post-screening panel at the Paley Center in New York, and he’ll be joined by co-stars Peter Weller and Ariel Winter for the panel discussion on Monday, September 24, at the Paley Center in Los Angeles.

After making his professional acting debut on Dark Shadows in 1968, Selby found fame on the large and small screens as well as Broadway. His film career runs the gamut from early starring roles opposite Barbara Streisand in Up The Sandbox and alongside Ron Liebman in The Super Cops to a memorable role as one of the key lawyers in The Social Network. On television, surrounding his 209 episodes of Falcon Crest, Selby has been seen on everything from The Waltons, Police Woman and Kojak to Ally McBeal, Cold Case, Mad Men, and HBO’s Tell Me You Love Me.

Selby is also one of the more learned actors around the industry, having earned a Master’s Degree from West Virginia University, and a Ph.D. in Theatre from Southern Illinois University. Beyond the stage and screen, Selby has written two volumes of poetry.

The affable Selby was happy to discuss his role as James Gordon following his initial recording session for the two halves of Batman: The Dark Knight Returns. Here’s what he had to say …

QUESTION: Having spent several hours in his mind, how do you see Police Commissioner James Gordon in this film? 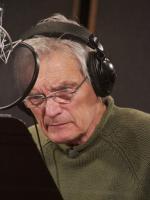 DAVID SELBY: Because Bruce Wayne is Batman, and even though we all want to be heroes, Gordon is willing to take a quieter, more backseat role. I think he’s persistent, he’s calm. He’s a very practical man, like certain presidents. Lincoln was a very pragmatic guy, and I think Gordon is a very pragmatic commissioner.

Gordon is the type of guy that would think, “If I’ve gotta do it, and it’s going to make it right, and I look out and I know that my wife is going to be fine, and the children are going to be fine, then if a certain kind of justice is required to do this, I can live with it.” That’s my kind of Gordon. A very strong, practical guy.

QUESTION: In this film, James Gordon is 70 years old and about to retire. David Selby is now 70 years old. Usually it doesn’t matter in voice acting, but does that age similarity help increase the bond between actor and character?

DAVID SELBY: What are you saying? (laughs) That I’ve been playing this game for 50 years? (laughs harder) Well, I guess that’s true. You know the frustrations, the thinking of “Okay, I’ve got a few years to go, and there’s still one thing I want to do.” Maybe I want to play Macbeth. I don’t know. There’s definitely some parallels. Really, though, it’s the whole life experience – that’s the thing that ties me to Gordon. Having been around and seen what we’ve seen. I understand his frustrations. My God, all you have to do is pick up a bloody newspaper. It’s hard to not get frustrated. Sometimes the best thing to do is to avoid the paper in the morning.

QUESTION: Was there a centering emotion you used in James Gordon to help you focus on his motivations?

DAVID SELBY: For Gordon, what he wants to do more than anything in the world is that he wants to leave the world a little better place than when he came into it. And he thinks of how awful it would be to live your life and not be able to do that.

I like Gordon. Sometimes you have to draw the line in the sand, the morality line, and each of us has to decide how far you’re willing to go for success. Now if you’re battling the Mutants, you can go a long way. You can step over that line, as long as you know why you’re doing it. That’s my little take on that.

QUESTION: You had more than 300 episodes to get to know Quentin Collins for Dark Shadows. You spent 209 episodes creating Richard Channing for Falcon Crest. Today you had about four hours to become James Gordon. How do you develop a character that quickly?

DAVID SELBY: You don’t. You just sort of depend upon Andrea (Romano) and Bruce (Timm), because they know this territory far better than you. I did do a little research, though. I asked my son, who is a great aficionado of Frank Miller and all of these things. That was my first call. He gave me a great rundown, so there was a little preparation. So mostly you put yourself in the hands of those that know the character, and learn from their experience.

QUESTION: So your son is a Frank Miller fan. Do you have newfound street cred in the family?

DAVID SELBY: You can’t imagine. My son-in-law is a big fan, too. I’m in like flint now. I couldn’t have done better than to be able to make that call. “Do you know Dark Knight?” “What do you mean, do I know Dark Knight? Who do you think you’re talking to?” “Well, I’m playing the Commissioner.” “You’re playing James Gordon? You’re playing Gordon?!? Commissioner Gordon?!?!?” I never mentioned the Gordon’s name. (laughs) I just said the Commissioner. Oh my God. How special is that? I like that.

QUESTION: Did you read comics when you were a kid?

DAVID SELBY: We lived in a little community called Woodburn, where I grew up in Morgantown, West Virginia. There was a store down the street from where I grew up – a confectionary, you know, “beer on tap” – and they had a comic rack. Tom and Ann Torch owned the place – Tom would sit in the corner by the Coke machine and play checkers. And then guys would come in and order … Dewey would order egg in his beer, and all the regulars who lived in the neighborhood would be around. We could look in the comics, and they never once said “Put the comics down.” Now, once we graduated from comic books and went on to Sexology and Golden Nugget girls, then Ann and her sister Hortense got concerned. But as long as we stuck to the comics, it was okay, so I read all the comics. I’d also go two houses down to my friend Wally’s house – he had a lot of comics. But at the Richwood Confectionary, that was terrific place to grow up. Sit in there, drink a Nehi Orange for a nickel, and read your comics.

QUESTION: What was going on in 1966 that made it right for both Dark Shadows and Batman to premiere and explode in popularity?

DAVID SELBY: That was a special time in the 60s, and for whatever reasons these shows captivated the public’s imagination. Maybe we just needed it in the 60s. They were shows that allowed you to escape … shows that made life a little easier to cope. I think about New York City at that time and all the things that were going on. The corruption, the racial conflicts, the unrest at Columbia University. There were protests everywhere. Then there was Chicago, and the election in 1968. The assassination of Martin Luther King, the assassination of Bobby Kennedy. Vietnam was raging. And then you had these shows. I’m sure some sociologist is examining all of this and working it out. But I think those two shows, Batman and Dark Shadows, they fit that expression, “Whatever gets you through the night.” It is interesting that they both came out of that period. But maybe not. Maybe the times were right.

QUESTION: You’ve obviously had the experience. But do you like playing the villain?

DAVID SELBY: I’m not complaining – a lot of times the villain is the most interesting character. But
I’ve played some awful people. I played a character who got rid of his own sister. In doing these characters, I like them, and you have to get your audience on your side somehow. They have to understand where you’ve come from. And maybe, just maybe, they’ll hang in there with you.