Warner Home Video released new media – including five images and a video clip – from the upcoming Batman: The Dark Knight Returns, Part One animated feature, the next highly-anticipated installment of the DC Universe Animated Original Movie line. The animated feature – arriving on September 25th, 2012 to Blu-ray Combo Pack, DVD, Download, and onDemand – is the first in a two-part adaptation of the acclaimed 1980s comic series The Dark Knight Returns starring a retired Batman who dons the cape and cowl to deal with a city decaying into crime. The new video clip, titled “Hallucination Batman,” is available below in the Quicktime/MP4 format along with five additional images from the film. Warner Home Video has also provided details on Peter Weller – voicing Batman in the animated two-part Batman: The Dark Knight Returns – appearing at an upcoming Paley Center showing of the feature. 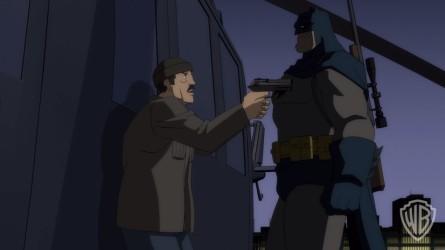 Peter Weller to attend West Coast premiere of
BATMAN: THE DARK KNIGHT RETURNS, PART 1
at The Paley Center for Media in Los Angeles

The event is completely sold out. Fans who have already submitted ticket requests will be notified this week if they are one of the lucky few to receive seats for the New York and Los Angeles events. Additionally, fans should stay tuned to http://darkknightreturnsdvd.com and DC.com for additional opportunities to procure tickets for the bi-coastal events. Produced by Warner Premiere, DC Entertainment and Warner Bros. Animation, Batman: The Dark Knight Returns, Part One will be distributed by Warner Home Video on September 25, 2012.