WaterTower Music has confirmed plans to release the score for the upcoming animated feature Superman: Unbound across assorted digital outlets and venues. Superman: Unbound – Original Motion Picture Soundtrack will be released digitally by WaterTower Music on Tuesday, April 30th, 2013, and will retail for between $7.99 – 8.99, with the price depending on outlet. Both Amazon and iTunes are confirmed to be carrying the score release, with Amazon also offering the soundtrack as a disc-on-demand for $9.99. The score for the DC Universe Animated Original Movie is provided by Kevin Kliesch, who recently scored the Cartoon Network ThunderCats animated series. Hitting home video and digital outlets on May 7th, 2013, Superman: Unbound adapts the acclaimed comic storyline “Superman: Brainiac” by Geoff Johns and Gary Frank. Click on the thumbnail images below for a closer look at the album cover art and track listings. 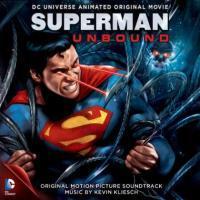 Superman: Unbound – Original Motion Picture Soundtrack will be released digitally by WaterTower Music on Tuesday, April 30th, 2013, and will retail for between $7.99 – 8.99, with the price depending on outlet. The soundtrack is currently available for pre-order through iTunes and Amazon. Amazon is also slated to release the soundtrack as a disc-on-demand title for $9.99.