The first official clip from the upcoming Lego Batman: The Movie – DC Superheroes Unite animated feature has been released by Warner Home Video. Hitting home video and digital outlets on May 21st, 2013, Lego Batman: The Movie – DC Superheroes Unite is the full-length animated feature film based on the popular TT Animation video game. The film will be available as a Blu-ray Combo Pack, DVD and OnDemand, though is now available to own via Digital Download. Initial Blu-ray Combo Pack & DVD release will include an exclusive Lego Clark Kent/Superman figurine on pack while supplies last. Click on the thumbnail below to view the new clip in the High-Definition Quicktime/MP4 format, and click the additional thumbnails for stills. 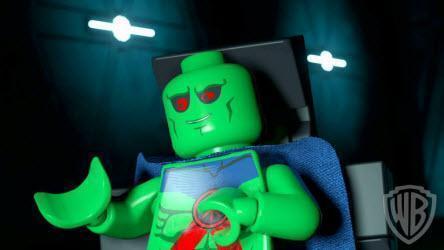 The clip features a first-look at the Batcave and a quick interaction between Bruce Wayne/Batman and Martian Manhunter, who reaches out from the Justice League’s Watchtower (lots of Easter Eggs in the
background).

Lego Batman: The Movie – DC Superheroes Unite provides the ultimate blend of action and humor guaranteed to entertain fanboys of all ages. The film finds Lex Luthor taking jealousy to new heights when fellow billionaire Bruce Wayne wins the Man of the Year Award. To top Wayne’s accomplishment, Lex begins a campaign for President – and to create the atmosphere for his type of fear-based politics, he recruits the Joker to perfect a Black LEGO Destructor Ray. While wreaking havoc on Gotham, Lex successfully destroys Batman’s technology – forcing the Caped Crusader to reluctantly turn to Superman for help.

Lego Batman: The Movie – DC Super Heroes Unite, the animated feature based on the acclaimed video game series, arrives on home video and for download come May 21st, 2013. Stay tuned for further updates and additional content here soon at The World’s Finest.