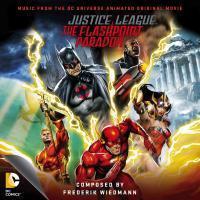 ORDER “JUSTICE LEAGUE: THE FLASHPOINT PARADOX: LIMITED EDITION” starting Sept10th at 12pm PST at www.lalalandrecords.com and get your CD booklet autographed by composer Frederik Wiedmann at no additional charge. Autographs are available while supplies last and are NOT guaranteed.

La-La Land Records, Warner Bros. Animation and DC Comics present the original motion picture score to the DC Universe Animated Original Movie Justice League: The Flashpoint Paradox. Acclaimed composer Frederik Wiedmann (Green Lantern: The Animated Series) seizes the opportunity to work with a live orchestra and unleashes a stupendous superhero score that propels this action-packed, fan-favorite DC Comics storyline. Fans of Wiedmann’s Green Lantern: The Animated Series scores will be delighted with what the composer has delivered here. Produced by the Frederik Wiedmann and MV Gerhard, and mastered by Doug Schwartz, this special release is limited to 2000 units and features liner notes from the composer and the filmmakers.

Additional soundtrack releases based on animated series inspired by DC Comics characters are expected to be released later this year, including a soundtrack release for the Batman: The Dark Knight Returns animated feature. Details will be available soon.

Discuss the Justice League: The Flashpoint Paradox soundtrack on The DC Animation Forum!