Warner Home Video has provided the first clip from the upcoming Necessary Evil: Super-Villains of DC Comics, an all-new documentary produced by Warner Bros. Home Entertainment and DC Entertainment for Blu-ray Combo Pack, DVD, and digital distribution this Friday, October 25th, 2013. The documentary, narrated by Christopher Lee, spotlights the pivotal role villains play in the lives of DC Comics’ biggest heroes. Necessary Evil: Super-Villains of DC Comics, which will feature clips from DC Comics-based animated productions past and present, ties in to the publisher’s current villain-themed comic initiatives and storylines. Click on the image and links below to view the clip in the Quicktime format, in both standard definition and high-definition formats. A description of the documentary and clip description can also be found below. 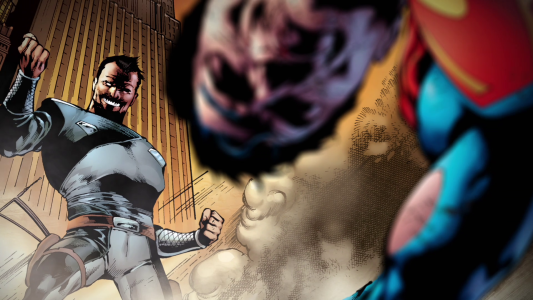 Synopsis: Necessary Evil: Super-Villains of DC Comics explores the thin line between right and wrong, the nature of evil and how super-villains can reflect society’s dark side as well as our own personal fears. It also offers keen insight as to the reasons why comic book fans are so fascinated by the very characters they hope to see defeated. Featuring interviews with such luminaries as directors Richard Donner (Superman), Guillermo del Toro (Pacific Rim) and Zack Snyder (Man of Steel), the film focuses on DC Comics’ most terrifying villains, including The Joker, Lex Luthor, Bane, Black Adam, Black Manta, Catwoman, Darkseid, Deathstroke, Doomsday, General Zod, Sinestro, the Suicide Squad, and more.

Necessary Evil: Super-Villains of DC Comics will hit shelves October 25th, 2013 on Blu-ray and DVD, from Warner Home Video and DC Entertainment, for the suggested retail price of $14.96 (DVD) and $24.96 (Blu-ray). No special features for the title have been announced as of yet. Stay tuned for additional updates.

Discuss this news on The Comic Book Culture Forum!