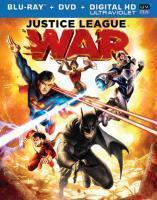 Synopsis: Going back to a time when superheroes were new to our world, we learn how the Justice League came together during an alien attack of Earth.

Special Features:
-A Sneak Peek at Son of Batman – An advance look into the next DC Animated Feature Film with the creators and cast
-Deconstructing Justice League: War with Jay Oliva and Jim Lee – Part commentary, part documentary, director Jay Oliva teams up with artist Jim Lee as they compare and contrast the comic to screen process of some of the most memorable moments in the film.
-Creating Heroes: The Life and Art of Jim Lee – This documentary film explores the work of master artist, Jim Lee, from his early days to his current position at DC and collaboration with Geoff Johns.
–Justice League: War Act D – From animatic to pencil test
-From the DC Comics Vault:
–1. Justice League Unlimited Season 3 “Destroyer”
–2. Batman: The Brave and The Bold Season 2 “The Malicious Mr. Mind”
–3. Young Justice Invasion: Destiny Calling Season 2 Part 1 “Happy New Year”
–4. Young Justice Invasion: Destiny Calling Season 2 Part 1 “Earthlings”
-Includes UltraViolet so you can enjoy the film on many different compatible devices.

In the above details provided by Warner Home Video, the studio also revealed that the Justice League: War animated feature was originally titled Justice League: Origins.