Warner Bros. Home Entertainment has issued an official press release for the upcoming animated feature Batman: Assault on Arkham, the next installment in the ongoing DC Universe Animated Original Movie line. The animated feature – which will be available on Blu-ray Combo Pack, DVD, and for Digital Download – features a new story based on the popular Batman: Arkham video game series. In Batman: Assault on Arkham, a routine mission by the Suicide Squad to stop The Riddler goes awry when The Joker gets involved, drawing the attention of Batman. Batman: Assault on Arkham will be available August 12th, 2014 on Blu-ray, DVD, and for Digital Download.

Continue below to view the press release.

GET READY TO ROOT FOR THE BAD GUYS IN
BATMAN: ASSAULT ON ARKHAM
AVAILABLE FROM WARNER BROS. HOME ENTERTAINMENT ON AUGUST 12, 2014!

Batman, one of the world’s most valiant super heroes, faces a villainous squad of criminals in an epic battle of good vs. evil in the DC Universe Original Movie, Batman: Assault on Arkham. Set in the world of the best-selling Batman: Arkham video game series, this action-packed film takes place between the Batman: Arkham Origins and Batman: Arkham Asylum video games. Available on August 12, 2014 from Warner Bros. Home Entertainment, on Blu-Ray™ Combo Pack, DVD and Digital HD, this hit is one DC Comics fans won’t want to miss. 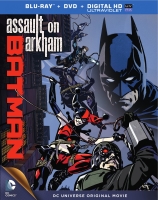 Gotham is in great danger when the government assembles a group of villains — code named the Suicide Squad — and forces them to break into Arkham Asylum to retrieve top secret information stolen by the Riddler. Things take a turn for the worse when one of the Squad members (Harley Quinn) frees the Joker, who is intent on blowing up Arkham Asylum and Gotham City. Batman must use his super hero wits and strength to thwart the wicked plans of the Joker and the Suicide Squad.

“Batman: Assault on Arkham is a thrill-ride with everything a fan would want — a courageous super hero, depraved villains, and suspenseful plot twists,” said Mary Ellen Thomas, WBHE Vice President, Family & Animation Marketing. “Featuring voice talent from some of today’s hottest television actors, Warner Bros. Home Entertainment is proud to release this as the next DC Universe Original Movie.”

“Working on a new Batman story is always exciting,” said Sam Register, President, Warner Bros. Animation and Warner Digital Series. “As a fan of the Arkham video games, I know this movie is going to entertain all Batman groups, from comic book and super hero fans to the most dedicated gamer.”

Batman: Assault on Arkham has tons of exciting enhanced content. The Blu-ray Combo Pack will include:

-Arkham Analyzed: The Secrets Behind the Asylum – This is the documentary that traces the strange, demonic history of the location where horror is mixed with the extremities of the criminally insane. A place where Batman must keep his watchful gaze, to insure that what goes in does not come out …. ever.

-The Joker’s Queen: Harley Quinn – If The Joker were to have a girlfriend, what would she be like? This featurette covers the story of the deviancy and often provocative side to The Joker’s greatest ally, Harley Quinn.

-An advance look into the next DC animated feature film with the creators and cast.

About Warner Bros. Home Entertainment, Inc.
Warner Bros. Home Entertainment (WBHE) brings together Warner Bros. Entertainment’s home video, digital distribution, interactive entertainment, technical operations and anti-piracy businesses in order to maximize current and next-generation distribution scenarios. An industry leader since its inception, WBHE oversees the global distribution of content through packaged goods (Blu-ray Disc™ and DVD) and digital media in the form of electronic sell-through and video-on-demand via cable, satellite, online and mobile channels, and is a significant developer and publisher for console and online video game titles worldwide. WBHE distributes its product through third party retail partners and licensees, as well as directly to consumers through WBShop.com.

Batman and all related characters and elements are trademarks of and ©DCComics. (s14)

About Warner Bros. Animation
Warner Bros. Animation (WBA) is one of the leading producers of animation in the entertainment industry, producing and developing both CG and traditionally animated projects for multiple platforms, both domestically and internationally. For TV, WBA produces series such as Beware the Batman, Teen Titans Go!, The Tom and Jerry Show and the upcoming Be Cool Scooby-Doo! and Wabbit – A Looney Tunes Production for Cartoon Network; original animated DC Nation shorts for Cartoon Network; and the forthcoming Mike Tyson Mysteries series for Cartoon Network’s Adult Swim. As the home of the iconic animated characters from the DC Comics, Hanna-Barbera, MGM and Looney Tunes libraries, WBA also produces highly successful animated films — including the DC Universe Animated Original Movies — for DVD. One of the most-honored animation studios in history, WBA has won six Academy Awards®, 35 Emmy® Awards, the George Foster Peabody Award, an Environmental Media Award, a Parents’ Choice Award, the HUMANITAS Prize, two Prism Awards and 20 Annie Awards (honoring excellence in animation).

Click here to view the recently-released trailer for Batman: Assault on Arkham.