Warner Bros. Home Entertainment is rebranding and re-releasing the three-disc Young Justice: Three-Pack Fun DVD compilation release, originally released back in April 2012. The release, titled Family Multi-Feature: Young Justice, collects the first 12 episodes of Young Justice in one package. The rebranded DVD, along with seven other similar titles, will hit shelves on October 14th, 2014 for the SRP of $19.97. The repackaged three-disc Family Multi-Feature: Young Justice DVD is a re-release of the Young Justice: Three-Pack Fun compilation release which collected three previous single-disc DVD releases together. Continue below for additional details. 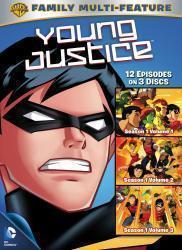 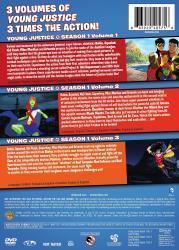 Family Multi-Feature: Young Justice
Studio: Warner Bros. Home Entertainment
Release Date: October 14th, 2014
Synopsis: In Young Justice, being a teenager means proving yourself over and over-to peers, parents, teachers, mentors and, ultimately, to yourself. But what if you’re not just a normal teenager? What if you’re a teenage super hero? Are you ready to join the ranks of the great heroes and prove you’re worthy of the Justice League? That’s exactly what the members of Young Justice-Robin, Aqualad, Kid Flash, Superboy, Miss Martian and Artemis-will found out, whether they have what it takes to be a proven hero. Based upon characters from DC Comics. This collection includes the first 12 episodes of the series.

The rebranded Family Multi-Feature: Young Justice three-disc DVD collection, including the first 12 episodes of Young Justice in one package, will hit shelves on October 14th, 2014 for the SRP of $19.97.

Warner Bros. Home Entertainment, through the Warner Archive collection special label, recently announced the upcoming Young Justice: The Complete First Season Blu-ray release. The collection, featuring the first 26 episodes from the acclaimed animated series from Cartoon Network and Warner Bros. Animation, will be available starting August 12, 2014 for $24.95US. The release will be available through most online retail outlets and is now up for pre-order. More details on that release can be found here.