Warner Bros. Home Entertainment has provided updated package artwork the upcoming Beware The Batman – Season One, Part Two: Dark Justice two-disc DVD collection, hitting shelves September 30th, 2014 for $19.97US. The DVD collection will feature the final thirteen episodes from the CG-animated series currently airing on Adult Swim. A Blu-ray release featuring the same content is expected to retail on the same date, available for purchase through Warner Archive for $21.99US. Additional details on that release can be found here.

Beware the Batman incorporates Batman’s core characters with a rogue gallery of new villains not previously seen in animated form. Along with backup from ex-secret agent Alfred and lethal swordstress Katana, the Dark Knight faces the twisted machinations of Gotham City’s criminal underworld.

Details and package art can be found below. 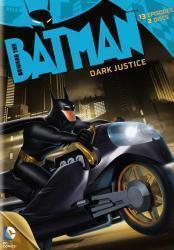 Synopsis: The groundbreaking all-new CGI animated series returns. Batman, Alfred and swordstress Katana are back to take on the underworld likes of Anarky, Professor Pyg, Mister Toad and Magpie. Produced by Warner Bros. Animation, this action-packed detective thriller deftly redefines what we have come to know as a “Batman show.”

The two-disc Beware The Batman – Season One, Part Two: Dark Justice DVD collection, featuring the final thirteen episodes of the short-lived CG-animated series, hits shelves September 30th, 2014 from Warner Bros. Home Entertainment for $19.97US. A Blu-ray release, featuring the same content on a single disc, will be available starting on the same date from Warner Archive for $21.99US. Additional details can be found on the The World’s Finest Beware The Batman subsite.

Beware The Batman airs Saturdays at 2:30am (ET/PT) as part of the Toonami programming block on Adult Swim.