The World’s Finest caught up with writer Matthew K. Manning to discuss his latest project – the epic Batman: A Visual History tome – along with his thoughts on the classic DC Comics character and his storied past. Manning has a long history with DC Comics, particularly when it comes to the animated adventures of the World’s Greatest Superheroes, having written for some of the “animated” titles the last few years. And now, Manning is channeling all that history, along with his own love of the character and the mythos, into an epic hardcover release celebrating Batman’s 75th anniversary.

Batman: A Visual History – now available to own – is a massive hardcover collection which offers something new even for the most diehard of Batman fans, Manning promises. He dives further into the book, his past work, and his own personal influences, in the Q & A below…

The World’s Finest: First off – tell us about Batman: A Visual History Why is this massive tome worth adding to the bookshelf? And, secondly, why are you the perfect person to write it? 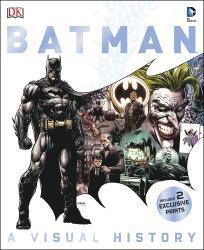 Matthew K. Manning: This particular Batman books is about as thorough as you can get. We start in 1939, and tell the character’s history from a real-world perspective month-by-month up until 2014. Not only do you get a bit of behind-the-scenes history here and there, but it’s essentially a complete summary of all the Dark Knight’s important adventures throughout his entire career. There’s not a book on the shelves that’s ever attempted quite this level of detail.

As for why I’m a good fit for this book, well, I mentioned on my website that I’ve been training for this book since the 5th grade, and I really wasn’t exaggerating. The Tim Burton Batman movie hit theaters back then, and it forever changed my life. I’d always liked Batman when he appeared on Super Friends and such, but I never really sought out the comics until that movie debuted. Since then, I’ve read over 10,000 Batman-related comics, and really enjoy every era of his history. I’ve also been lucky enough to write a dozen or so comics for DC about the Caped Crusader, and plenty of books on the subject. But none quite like this. I co-wrote a book called The Batman Vault for Running Press, but that was more of a general overview with great little pull-out “artifacts.” My book The Batman Files for Andrews/McMeel was a faux scrapbook/journal written by Batman himself about his entire history, told through the character’s voice. It dealt with his fictional timeline, rather than the real world one. So this book is unique in that it shows how the character’s history has changed and evolved with the times.

WF: You’ve commented this is the book you were born to write. Can you expand on that and tell us about how influential the character has been on you and why he’s a pivotal part of your life?

MM: Like most kids, I grew up a fan of superheroes. I was also fascinated with newspaper comic strips, and really wanted to write and draw them. Back then I started reading a few Marvel Comics, but didn’t get truly immersed into the superhero world until the ’89 Batman movie. It was a great time to be reading comics, with recent hits like Batman: Year One and The Dark Knight Returns still on the shelves, and I was completely hooked. From there I branched out to the Outsiders and the Justice League, and eventually back to Marvel to see what Spider-Man had been up to. But really, those hours spent reading the likes of Denny O’Neil, Frank Miller, Grant Morrison and the like really influenced my worldview and my own personal morals.

WF: Why do you think Batman has remained so enduring all these years, and has been able to amass such a history? There are many other comic character who have been around for roughly the same time, but what makes Batman so…predominant among them?

MM: Firstly, I think kids can identify with Batman’s origin. They understand what that particular pain would be like. And both kids and adults are fascinated with the idea of a person literally being as good as he can be. It’s something we all wish we had the willpower to do, and like Batman, we want to be our personal best without the use of powers. Plus, there’s the simple fact that he looks cool. He’s fun to draw, so he attracts the best artists. And that makes for some great looking comic books, which in turn constantly attract readers.

WF: Can you walk us through your process for creating this book? The research, the writing, deciding what stays and what goes … how big of a project was this for you?

MM: Unlike past volumes of DK’s chronicle series, I attempted to write this one solo, so that meant a lot more work. The hardest part was the outline. It was a process of going through every single issue of my Batman collection, and flipping through hundreds of issues I haven’t read yet. There was an attempt to record the debut of every new Batmobile, Batwing/Batplane and costume, as well as every major and minor villain and supporting character. After the outline was finished, the rest was just reexamining those stories and trying to fit in all the important details in the limited space available. As it happened, a deadline change caused me to have to give up writing the 1960s and hand that chore over to the capable Matt Forbeck. I would have loved to handle that one as well, but I was content with just supplying the outline for it. All told, the book took at least a half a year to write.

WF: When some folks see these types of books, the “ultimate guides,” etc., they usually scoff at them because they assume they already know everything that’s going to be in the book. How is this book different? Why is this book a must-read for fans? 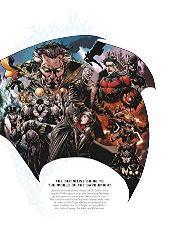 MM: I doubt there are many people that will know all the information in this book. It’s more than a summary of a handful of major story lines, and even I learned plenty in the course of writing it. This covers everything from the debut of Batmouse to an obscure future Batman of New York City from the old Hex title. There’s plenty of new info for diehard and casual fans alike.

WF: The animated adventures of Batman have played a huge role in the character’s popularity? Can you give us an idea of how you handle their importance and role in this month-to-month breakdown of major Batman events?

MM: Unfortunately, because of licensing issues, we weren’t really able to get into the movies or TV shows here. Those would require separate negations between DC and DK. While they shows and cartoons are mentioned here and there, this book remains mainly about the comic books themselves. Which is probably just as well. It’s already 350 pages as is…

WF: Now, you’ve been a part of the animated comic lore, having contributed to some of the popular DC “animated” comics. Care to run through some of your favorites with us?

MM: I absolutely love writing those types of titles, so it’s hard to pick my favorite. I really enjoyed my first issue of The Batman Strikes (# 10), the tie-in title to The Batman cartoon. We were able to tell the story through flashbacks in an interesting way, really adding to the mystery of the issue. Also, my final issue of Beware the Batman (# 6) was a lot of fun, as the entire story was told from Alfred’s point of view, like a first-person shooter video game. It was an interesting experiment that I think really worked thanks to the very fluid and lively work of the artist, Luciano Vecchio. And while not an animated comic, I was really happy with how my Calendar Man story ended up in Batman: 80-Page Giant 2010.

WF: You’ll be appearing at New York-Comic-Con, starting up later this week. Can you give us a rundown of your schedule and appearances?

WF: Before we wrap this up, can you tell us about your next related project – The World According to The Joker?

MM: Insight’s new “World According to” series are essentially small “advice” books written by the title character. They include lots of great paper pull-outs and the like, and have been extremely fun to write. My first book for them is out now, titled The World According to Wolverine. The World According to Joker is out on October 30th, but I think they might have advance copies of it at the New York show. It’s written entirely in the Joker’s voice (except for a guest spread by Harley and notes from Dr. Arkham), and gives you all the twisted advice you can every need. You can even spin the wheel of death, to decide which way you can kill Robin. I’ve also written two upcoming “journals” for Insight, which are essentially blank journal pads, with a short Batman and Joker story starting each one off.

WF: Now, to bring this to an end, can you give us one last reason to run out and pick up Batman: A Visual History, now available online and retail outlets everywhere?

MM: Without this book on your shelf, you may never read about the most Earth-shattering team-up between Batman and Superman in the history of comics: the day they went to a bar and drank milk. That story actually happened and was even penciled by the great David Mazzucchelli. But you have to read the book to find out when… 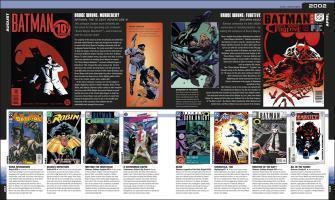 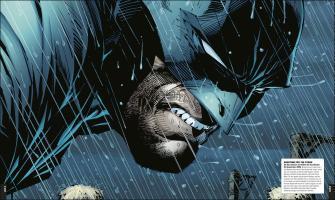 Special thanks to Matthew K. Manning for his participation in this Q & A!

The massive Batman: A Visual History hardcover book is now available at retail and digital outlets everywhere for $50US. Published by DK Books, the visually stunning, definitive guide by Manning arrives in a slipcase featuring specially commissioned artwork by DC Comics artist Jason Fabok plus two original prints. Check out the The World’s Finest review for this book here.

Discuss Batman: A Visual History at the Toonzone Forums!