Warner Archive Collection, the Warner Bros. Home Entertainment specialty label, has provided a look at the main menu system for the upcoming Young Justice: Invasion Blu-ray release, now available for pre-order. The 2-disc collection, featuring the final 20 second season episodes from the acclaimed animated series from Cartoon Network and Warner Bros. Animation, and inspired by the DC Comics characters, will be available starting November 18th, 2014 for $24.95US from the label. In addition to the entire second season of Young Justice, the Blu-ray title will also include two commentary tracks and a featurette.

Click on the images below for a closer look. 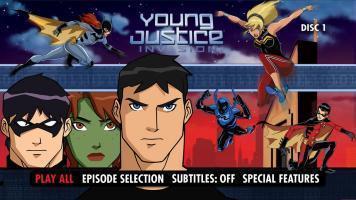 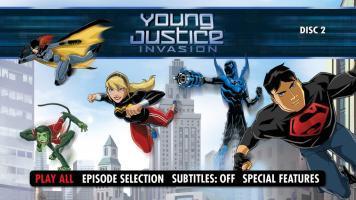 Additional details on this release can be found at The World’s Finest.

Young Justice: Invasion arrives on Blu-ray from Warner Archive Collection, and will be available starting November 18th, 2014 for $24.95US from the label. Please note the release then goes wide to all major digital outlets starting December 2nd, 2014. The collection is currently up for pre-order through most online retails outlets.