DC Comics has officially announced details for the February 2015 issue of Teen Titans Go!, the bi-monthly all-ages comic series from DC Entertainment. The Teen Titans Go! comic book title, based on the Cartoon Network ratings hit of the same name, collects two 10-page stories per issue. Each 10-page story is initially released monthly exclusively through digital outlets, including the DC Comics’ online store and Comixology, before being published for print every two months. Details for the upcoming print issue of Teen Titans Go! can be found below, as well as details on the title’s first trade paperback collection.

The day the Titans have been dreading all year has finally arrived. A day of unimaginable pain. Insurmountable loneliness. Inconceivable amounts of ice cream. That’s right – it’s Valentine’s Day!

Details for the first Teen Tirtana Go! trade paperback release are avalable below.

Join Robin, Starfire, Beast Boy, Cyborg and Raven as they display their unique brand of hijinks, mayhem and justice in these stories from issues #1-6 of their new series! But giant pizza monsters aren’t the only dastardly and delicious villains on the menu…so dig in, Titans!

Continuing, DC Comics has also released details for an upcoming DC Collectibles figure based on the upcoming DC Universe Animated Original Movie title Batman Versus Robin. The animated feature, slated for an early Summer 2015 debut, features Batman facing off against a horde of undead assassins called Talons while dealing with his newfound son Damian. 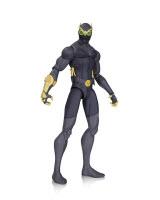 DC UNIVERSE ANIMATED MOVIES
BATMAN VS. ROBIN: NINJA TALON ACTION FIGURE
NINJA TALON – 6.75”*
The Dark Knight must not only battle the Boy Wonder in the DC Universe Animated Original Movie, Batman Vs. Robin, but also an army of undead assassins called the Talons! This detailed action figure captures their stylized design from the film.
$19.95 US • On Sale July 2015
*Allocations May Occur