Warner Archive states Batman: Mask of the Phantasm will arrive on Blu-ray come July 25, 2017, with pre-order available through WB Shop for $21.99. The Blu-ray title will feature a new HD remaster of the classic animated feature along with two aspect ratios – theatrical and full frame. Batman: The Animated Series fans have been clamoring for an updated Batman: Mask of the Phantasm home video release since the feature’s original DVD release back in 1999. Continue below for the details courtesy of Warner Archive. 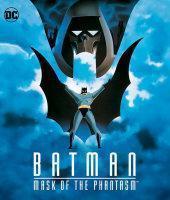 When the city’s most feared gangsters are systematically eliminated, the Caped Crusader is blamed. But prowling the Gotham night is a shadowy new villain, the Phantasm, a sinister figure with some link to Batman’s past. Can the Dark Knight elude the police, capture the Phantasm and clear his own name?

Unmasking the Phantasm is just one of the twists in this dazzling animated feature. Discover revelations about Batman’s past, his archrival the Joker and Batman’s most grueling battle ever — the choice between his love for a beautiful woman and his vow to be the defender of right. Batman: Mask of the Phantasm is “a mystery that is genuinely absorbing, suspenseful and moving” (Cincinnati Enquirer).

Warner Archive’s Batman: Mask of the Phantasm Blu-ray release is available for pre-order for shipment on July 25, 2017 for $21.99. The title can be pre-ordered through WB Shop and other digital retailers.

The above details are also available at The World’s Finest. Stay tuned for more updates on this exciting upcoming Blu-ray release from Warner Archive. For further details on Batman: Mask of the Phantasm, check out the special subsite right here at The World’s Finest, and continue below to view the film’s original trailer.