Warner Bros. Home Entertainment has provided details on the forthcoming Justice League: The New Frontier – Commemorative Edition home video release. The title, hitting Blu-ray, Blu-ray Combo Pack and DVD on October 3, 2017, features the Justice League: The New Frontier animated movie, originally released in 2008, along with a mix of original bonus content from its initial release plus new features. The press release, along with box art and trailer, can all be found below.

Warner Bros. Home Entertainment returns to the roots of DC’s greatest Super Heroes – and their unifying moment – with the celebratory release of Justice League: The New Frontier – Commemorative Edition on Blu-ray Combo Pack, Blu-ray Steelbook, and DVD on October 3, 2017. 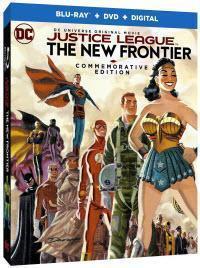 Justice League: The New Frontier – Commemorative Edition is the epic tale of the founding of the Justice League. Produced by Warner Bros. Animation, DC Entertainment and Warner Bros. Home Entertainment, the animated film is directed by David Bullock from a script by Stan Berkowitz. Sander Schwartz and Bruce Timm are Executive Producers. Michael Goguen is Supervising Producer.

The action-packed adventure features iconic DC Super Heroes Superman, Batman and Wonder Woman alongside Green Lantern, Martian Manhunter and The Flash as they band together to form the legendary team. Strangers at first, these very different heroes must overcome fear and suspicion to forge an alliance against a monster so formidable, even the mighty Superman cannot stop it alone. If they fail, the entire planet will be “cleansed” of humanity.

Justice League: The New Frontier – Commemorative Edition includes incredible bonus features on both the Blu-ray Combo Pack and the DVD: 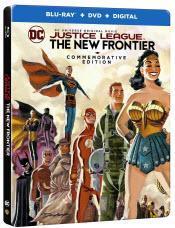 • Featurette – “Retro Action Cool: The Story of Darwyn Cooke” – A revealing look into the life and times of one of comics’ most brilliant figures, the late Darwyn Cooke.
• Featurette – “Super Heroes United! The Complete Justice League History” – A comprehensive look at nearly a half-century of Justice League chronology from the inception in the comics to vivid animated renditions in the late 2000s. The story is told with a myriad of interviews tracing the early days of DC Super Hero team ups during the Golden Age to the Silver Age rendition where the established heroes emerged and beyond. Interviews include such notables as Dan DiDio, Michael Uslan, Paul Levitz, Mark Waid, Denny O’Neil, Stan Lee and Marv Wolfman.
• Featurette – “The Legion of Doom: The Pathology of the DC Super Villain” – This 10-minute piece examines the early mythological archetypes of nemesis characters from a historical perspective and reveals how the tenants of this rich history were adapted and woven into the Justice League stories.
• Featurette – “Comic Book Commentary: Homage to the New Frontier” – This mini-documentary is a nod to the fans of the New Frontier comics, further expanding the themes contained in the source material and how these elements were truncated or evolved for inclusion in the film. It features vivid imagery culled from the pages of DC: The New Frontier, mixed with the commentary of Darwyn Cooke. This featurette is a treat for both fans and scholars of the medium.
• Sneak Peak: Gotham by Gaslight – A behind-the-scenes look at the next DC Universe Original Movie, inspired by the 1989 Elseworlds tale of Batman – at the turn of the 20th century – as first created as a graphic novel by Brian Augustyn and Mike Mignola, with inks by P. Craig Russell.
• Audio Commentary I/The Filmmakers – Featuring Justice League: The New Frontier filmmakers Bruce Timm, Michael Goguen, David Bullock, Stan Berkowitz, Andrea Romano and Gregory Noveck.
• Audio Commentary II/Darwyn Cooke – Featuring award-winning writer/artist Darwyn Cooke

“Justice League: The New Frontier – Commemorative Edition gives fans the opportunity to savor the unique genius of such a legendary comic talent as Darwyn Cooke in a thrilling, animated adaptation of a modern classic,” said Mary Ellen Thomas, Warner Bros. Home Entertainment Vice President, Family & Animation Marketing. “The addition of an all-new Darwyn Cooke mini-documentary adds to the special celebration of his work. And his story serves as a keen reminder of the history of these cherished DC Super Heroes, in perfect timing with the theatrical release of the Justice League film.”

Justice League and all related characters and elements are trademarks of and ©DC Comics. (s17)