WaterTower Music has released press details for the forthcoming Batman and Harley Quinn: Music From The DC Universe Original Movie and Batman Vs. Two-Face: Music From The DC Animated Movie soundtrack releases, both hitting digital on October 6, 2017. Both titles will also see a limited physical release as well. The score for both features is provided by Dynamic Music Partners, known from their long association with DC Comics-based animated properties. For a rundown of press details, and a look at the cover for both soundtrack releases, please continue below. 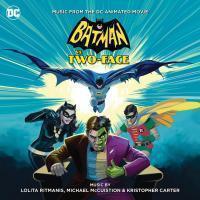 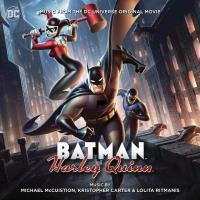 Water Tower Music announced today the October 6 release of two titles: Batman and Harley Quinn: Music From The DC Universe Original Movie and Batman Vs. Two-Face: Music From The DC Animated Movie. The albums feature the movie’s original score by Dynamic Music Partners (DMP), a team of 3 composers who previously scored Batman Beyond. The soundtracks will be available at all digital music providers and on CD exclusively at FYE stores.

“We’re thrilled that WaterTower Music is releasing soundtracks for two of our current projects: Batman & Harley Quinn and Batman vs. Two-Face!” explained the three Emmy Award-winning composers Michael McCuistion, Lolita Ritmanis and Kristopher Carter, collectively known as Dynamic Music Partners. “The Batman vs. Two-Face score gave us one final opportunity to honor the late Adam West as Batman, with all the Bams! Zings! and Pows! made famous by the original television series music written by musical icons Neil Hefti and Nelson Riddle. Collaboration with producer James Tucker always brings us great creative freedom!

“With Harley Quinn, we returned to the musical world of Batman: The Animated Series, which was our first collaboration with Bruce Timm as part of Shirley Walker’s team,” they continued.  “Along with recreating that Dark Deco mood, we also paid homage to some of the greatest jazz scores of the 70’s and 80’s. Our long creative history with Bruce usually allows for a musical and dramatic shorthand while discussing the score; this particular project, with its comedic twists and turns, really kept us on our toes!

“We worked with our key music team on the scores (engineers Mark Mattson and Mako Sujishi, woodwind player John Yoakum, Greg Herzenach on guitars, Andris Mattson playing trumpet on Two-Face, and trumpet legend Wayne Bergeron on Harley) to take the listener on journeys that are simultaneously familiar and fresh for fans who will undoubtedly appreciate these distinct takes on the Batman universe.

Both albums will be available October 6 at all digital music providers and on CD exclusively at FYE Stores.

About Batman and Harley Quinn
In Batman and Harley Quinn, Poison Ivy and Jason Woodrue (a.k.a. The Floronic Man) embark on an ecological quest to save the planet – and, unfortunately, eliminate most of humankind along the way. To save humanity, Batman and Nightwing are forced to enlist Harley Quinn to catch Poison Ivy, Harley’s BFF and frequent partner-in-crime. But Batman’s patience is put to the test by the unpredictable and untrustworthy Harley during the twists and turns the reluctant companions face during their bumpy road trip. The result is a thrill ride of action, adventure and comedy no Batman fan has seen before.

About Batman vs. Two-Face
As the sequel to the 2016 hit animated film Batman: Return of the Caped Crusaders, the all-new Batman vs. Two-Face finds Batman and Robin back in classic 1960s action, protecting Gotham City from some of the most nefarious villains in comics history. But when the mutilated master of multiplicity, Two-Face, begins staging a daring crime wave across Gotham, the Caped Crusaders must work double-time to discover his mysterious secret identity before they can halt his evil-doing – all the while combating the likes of Catwoman, Joker, Riddler, Penguin, Bookworm, Hugo Strange and King Tut!

About Dynamic Music Partners:
Emmy Award-winning composers Michael McCuistion, Lolita Ritmanis and Kristopher Carter, collectively known as Dynamic Music Partners, have created hundreds of hours of music for a variety of different genres, including TV series, independent films, video games and live performance events. They have collectively earned twenty-eight Emmy Award nominations and six Annie Award nominations as composers for Marvel’s Avengers Assemble, Batman: The Brave And The Bold, Justice League, Teen Titans, Batman Beyond, The Zeta Project and The New Batman Superman Adventures. Original concert works and suites of their scores have been performed in festivals and special events; from New York’s Lincoln Center to The Hollywood Bowl, The Kennedy Center, The Griffith Observatory in Los Angeles, Tenerife – Spain and beyond, their music has received critical acclaim. Their Prime-time Emmy Award nominated musical Batman: The Brave and the Bold: Mayhem of the Music Meister, starring Neil Patrick Harris was a historic first Batman musical to ever be composed.

They began their careers composing music for Batman: The Animated Series, Superman: The Animated Series and Batman Beyond, for which they each received the Emmy Award in Music Direction and Composition. As orchestrators they have worked with many of Hollywood’s A-list composers, including Michael Kamen, Basil Poledouris, Howard Shore, Carter Burwell, Elliot Goldenthal, Mark Snow and Shirley Walker. Kristopher, Michael and Lolita are currently working on the third season of Marvel’s Avengers Assemble

Kristopher, Michael and Lolita work both collectively and individually. Kristopher recently completed the score to the Webby-nominated short film The Birds Of Anger for G4TV and just returned from a series of lectures at the North Carolina School of the Arts. Michael recently scored the latest Griffith Observatory production Time’s Up which is now playing at the observatory in the Samuel Oschin Planetarium. Lolita has been very active in the concert music arena this past season, having had works performed at The Kennedy Center in Washington, D.C., and 2 original musicals receiving performances in Latvia throughout 2014-2015, as well as the premiere of her symphonic work Overture to Light. This remarkable and very contemporary trio of composers and performers is an example of creative collaboration, business savvy, and artistic expression of the highest, most original level. They are currently working in today’s industry and are examples and role models for aspiring film composers everywhere.

To preview sample tracks from both soundtracks, please click on the players below.