Warner Bros. Home Entertainment has provided details for the upcoming Justice League: Throne of Atlantis – Commemorative Edition, a special re-release of the 2015 animated film. The new release, with includes new bonus content and is times for the theatrical release of the live-action Aquaman movie, hits Ultra HD Blu-ray Combo Pack, Blu-ray Combo Pack and Digital on November 13, 2018. Press details can be found below.

In Justice League: Throne of Atlantis – Commemorative Edition, Cyborg discovers an imminent threat in the depths of the oceans so powerful that it rallies together the newly formed Justice League. Meanwhile, wandering thousands of feet above the ocean floor is drifter Arthur Curry, a man with strange powers who may be the last chance to bridge the ancient Atlantean world with our own. Superman, Batman, Wonder Woman and the rest of DC’s Justice League must band together as they face off against warmongering Orm, an army of sea creatures, otherworldly weapons and perilous odds. In this all-new epic adventure from the DC Universe, mankind’s only hope of escaping from the darkness lies with the guiding light of a man – Aquaman! 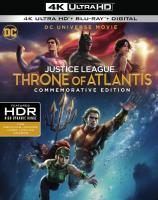 -“Aquaman: The New King” (NEW featurette) – An immersive look at Arthur Curry’s evolution from guardian of the ocean to the King of Atlantis and key member of the Justice League.
-Audio Commentary (NEW) – Renowned former DC Editor and current Creative Director of Animation Mike Carlin, Creative Director of Animation, and Throne of Atlantis screenwriter Heath Corson share their insights into the legend of Aquaman.
-“Scoring Atlantis: The Sound of the Deep” (Featurette) – Every great film needs a great musical score. Filled with emotion, music takes us on a dynamic journey as we adventure with the hero. Throne of Atlantis takes us on that quest through the eyes of Arthur Curry.
-Robin and Nightwing Bonus Sequence – Producer James Tucker provides video commentary for this exciting bonus sequence where Robin and Nightwing join forces.
-Throne of Atlantis: 2014 New York Comic Con Panel – The entire, lively one-hour panel discussion between actor Matt Lanter, producer James Tucker, screenwriter Heath Corson, character designer Phil Bourassa and dialogue director Andrea Romano.
-“Villains of the Deep” (Featurette) – From Ocean Master to Black Manta to King Shark, each villain operates from his own deep sense of conviction, presenting an incredible challenge for the hero in Arthur Curry, aka Aquaman. This documentary goes into the biographical details of the villains.
-A Sneak Peek at “The Death of Superman” – The Death of Superman is widely considered one of the most popular stories in the Superman canon and the DCU. This sneak peek at the exciting new film discusses the story and its place in pop culture.
-A Sneak Peek at “Reign of the Supermen” – An exciting look at the new film which brings the epic and emotional story of a world without the Man of Steel to life.
-Bonus cartoons from the DC Comics Vault:
—Batman: The Brave and the Bold, “Aquaman’s Outrageous Adventure!”
—Batman: The Brave and the Bold, “Evil Under the Sea!”
—Aquaman, “Menace of The Black Manta” and “The Rampaging Reptile-Men”
—Justice League Unlimited, “Far from Home”

Marketing Support:
Justice League: Throne of Atlantis – Commemorative Edition will be supported by a national online, promotional, and publicity campaign.

Digital:
Justice League: Throne of Atlantis – Commemorative Edition will be available to own on Digital November 13, 2018. Digital purchase allows consumers to instantly stream and download all episodes to watch anywhere and anytime on their favorite devices. Digital movies and TV shows are available from various digital retailers including Amazon Video, iTunes, Google Play, Vudu, and others. A Digital Copy is also included with the purchase of specially marked Blu-ray & 4K Ultra HD discs for redemption and cloud storage.

For a review of the animated feature and its previous home entertainment release, click here. Also accessible through the link is an assortment of images, videos and bonus content dedicated to the DC Universe Movie title. Stay tuned for more Justice League: Throne of Atlantis – Commemorative Edition coverage right here at The World’s Finest.