Warner Bros. Home Entertainment has provided details on a regular edition release of the upcoming Batman: The Complete Animated Series – Deluxe Edition Blu-ray box set, which will be available on November 27, 2018. The regular edition release will include slimmed down packaging and all of the same on-disc content as the Deluxe Edition, but will not feature any of the physical extras. The Batman: The Complete Animated Series regular edition will retail for $89.95 MSRP. Click on the image below for a closer look at the cover.

The Batman: The Complete Animated Series regular edition collection is described as follows: 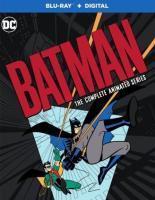 All 109 episodes (Batman: The Animated Series and The New Batman Adventures) of the critically acclaimed, Emmy-winning series that redefined the Dark Knight with its thematic sophistication, aesthetics, voice acting, and orchestral score, have been remastered for the first time since their broadcast airing and are now all here in this 12-disc Blu-ray set, which also includes a Digital version. This 12-disc set includes a brand new, in depth featurette on the legendary storytellers behind the series, loads of in-depth featurettes, and commentaries on 12 episodes with animation creators.

Stay tuned for further updates on these titles. For a closer look at the recent Batman: Mask of the Phantasm and Batman & Mr. Freeze: Sub-Zero remasters, click here and click here. Also, check out the Batman: The Animated Series subsite right here at The World’s Finest for a wealth of content, including extensive interviews, reviews, images, videos, special easter eggs, exclusive content and so much more.