Warner Bros. Home Entertainment has announced an animated feature based on the Injustice: Gods Among Us video game franchise is coming, with an expected Fall 2021 release, as part of the studio’s DC Animated Movie line. The studio revealed news of the upcoming animated movie through press details for Batman: The Long Halloween, Part Two, which lists Injustice as an upcoming DC Animated Movie release. While specific details have not been released, Injustice is slated to adapt the storyline behind the popular DC Comics-based fighting game developed by NetherRealm Studios and published by Warner Bros. Interactive Entertainment. Press details can be found below:

Batman: The Long Halloween, Part Two
Special Features – Blu-ray and Digital
Sneak Peek at the Next DC Animated Movie, Injustice: Sides are chosen and battle lines are drawn as the Earth’s greatest heroes go to war…with each other. 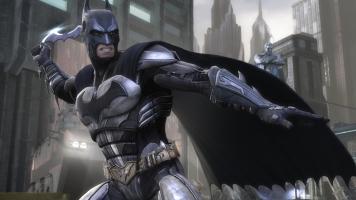 2013’s Injustice: Gods Among Us and its 2017 sequel, Injustice 2, take place in an alternate universe where Superman turns into a dictator and rules the world after The Joker makes him mistakenly kill his wife Lois and their unborn child. Both installments of the video game franchise were major hits for Warner Bros., sparking a host of spin-off products, including comic books and soundtracks. Notably, the video game series includes voice work by Kevin Conroy, George Newbern, Susan Eisenberg, and Phil LaMarr, among other actors from DC Animated Universe projects. A third Injustice video game is reportedly in the works. Warner Bros. Home Entertainment is expected to formally announce Injustice this summer, followed by a release in Fall/Late 2021.

What if our greatest heroes became our greatest threat? From the indomitable DC Comics and the makers of the definitive fighting game franchise Mortal Kombat comes Injustice: Gods Among Us, a bold fighting game featuring a large cast of favorite DC Comics icons. Set in a world where the lines between good and evil are blurred, players will experience heroes and villains engaging in epic battles on a massive scale. A deep, original story compliments the fighting action that pits many of the great heroes and villains from the DC universe against each other — Batman, Harley Quinn, Solomon Grundy, Superman, The Flash, Wonder Woman and many others lose their allegiances and fight for Injustice!