This week sees the release of Batman: Death in the Family, the interactive animated movie based on the infamous 1988 comic book storyline that changed Batman and Robin as we know them. For those who aren’t all that familiar with it, this classic Bat-comic was a major turning point for not only the Dark Knight, but comic book culture in general. It saw the murder of Jason Todd at the hands of the Joker in a move that was ultimately decided by fandom.

Jason Todd first appeared in Batman #357. His origin may seem familiar. Perhaps even too familiar. Like Dick Grayson, he was a circus acrobat who lost his parents to crime. Over time, he was adopted by Bruce Wayne, and, with the blessing of Dick, became the new Robin.

The reality-altering events of 1984-1985’s Crisis on Infinite Earths gave DC a chance to correct some fan criticism that Jason was no more than a younger Dick Grayson clone. His origin was revamped in Batman #408 (written by The Road to Perditions’ Max Allan Collins and penciled by Chris Warner). Jason was now a street kid who first met Batman when he was trying to steel the wheels from the Batmobile. He had a harder edge and a rebellious attitude. He was a Robin for his time. 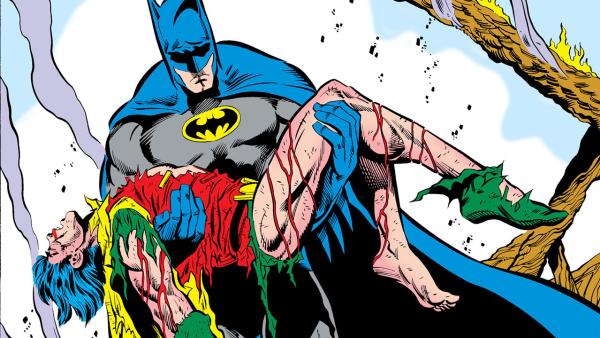 Or was he? Fans, unfortunately, didn’t take to him. Was it his in-your-face attitude? Did they simply miss Dick Grayson? Whatever the reason, the response to the new Jason wasn’t kind and a solution was needed.

DC had been looking for a way to test new fan voting technology on something that wasn’t trivial. Writing in the postscript for the first edition of the Batman: A Death in the Family trade paperback, Batman group editor Denny O’Neil said, “We knew that the technology for polling our readers by telephone was available and we asked ourselves if we could use it—in effect, extend our policy of heeding the opinions fans express in letters and conversations at conventions and comic shops. If we did, it would be a first, and we didn’t want to waste it on anything minor: whether Firestorm’s boots should be red or yellow would not be an appropriate question to ask in this context, particularly since, unavoidably, each called in vote would cost the caller fifty cents. This had to be important stuff. Life-and-death.” 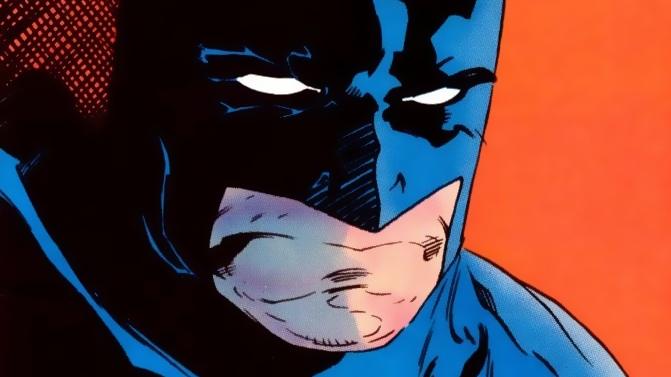 When “A Death in the Family” begins, Jason Todd’s world is rocked upon learning that Catherine Todd, the deceased woman who raised him, was not his biological mother. He sets off on a globe-trotting adventure to learn his mother’s true identity and find out if she’s still alive. Batman, knowing what it’s like to grow up without a mother, puts aside his initial apprehension and helps him. While searching in the Middle East, they have a run in with the Joker, who plans to get into the arms dealing business.

Eventually, Batman and Robin find Jason’s mother, Sheila Haywood, in Ethiopia. The reunion is happy, until Jason learns his mother is being blackmailed by the Joker. Disobeying Batman’s orders to wait for him, Jason confronts his mother by himself, hoping to free her from the Clown Prince of Crime’s grip. Instead she turns her son over to the Joker.

The betrayal from his mother probably hurt Jason much more than what came next—a vicious beating from the Joker with a crowbar. 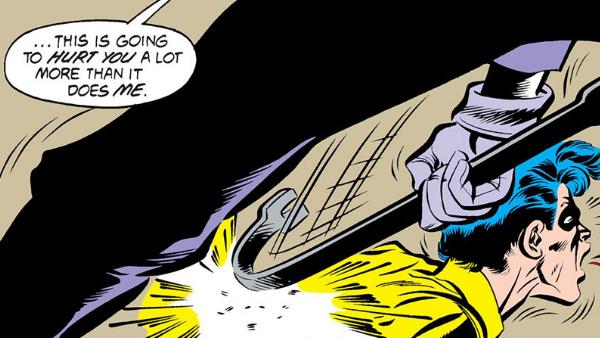 The Joker betrayed Sheila as well, leaving her and Jason trapped in a warehouse with a bomb. Despite the assault orchestrated by his own mother, Jason used his last ounce of strength in an effort to save her. It was the ultimate act of forgiveness and heroism. It was a move that won over some Jason Todd haters. But would enough be won over to save him?

Batman arrived at the warehouse just in time to watch it explode. Was Jason alive or dead? The Dark Knight, the readers, and even DC’s editorial staff didn’t know at first.

The cliffhanger for Batman #427 was followed by a full page ad telling readers “Robin will die because the Joker wants revenge, but you can prevent it with a telephone call.” 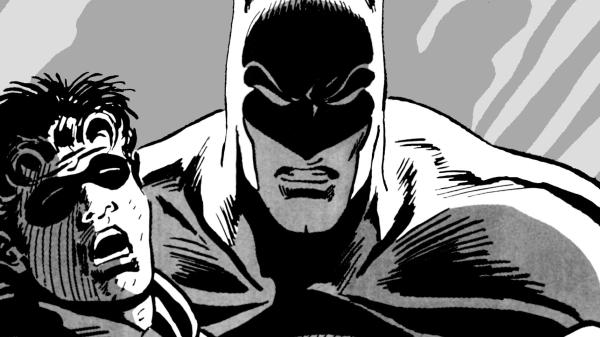 Readers were given two separate numbers to call, one if they wanted Jason to live and another if they wanted him to die. There was a 36-hour window to vote, and DC was prepared for both outcomes.

Batfans got the message and 10,614 readers called in to vote on Jason’s fate. His fate was sealed with 5,343 voting in favor of death, while 5,271 voted for survival. With only a 72-vote margin, the tally was close. If more fans had called in, the history of the Batman universe would be different.

The opening pages of Batman #428 show the Dark Knight finding Jason’s body. The silent splash page of Batman holding his fallen sidekick has become one of the most iconic pages in comic book history and has served as the cover image for all collected editions of “A Death in the Family” and is recreated for the cover of the new animated movie. 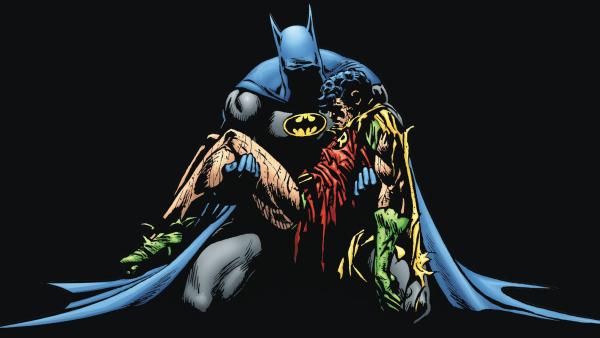 It was the most tragic event in Batman’s life since his parents’ murder. Superman showed up for the last act of the story in an attempt to calm Batman’s sudden bloodlust. Alas, it all ends with the Joker’s body lost in a helicopter explosion over the water, leaving Batman feeling unresolved.

“A Death in the Family” shook the world. “I was emphatically not prepared for the reaction,” wrote O’Neil. “As soon as the news of Jason’s expiration got out, our publicity whiz, Peggy May, began getting calls from journalists. Dozens of them. For three long working days and part of a fourth, until Peggy declared a moratorium, I talked. To newspapermen. To disc jockeys. To radio and television reporters. Here and abroad. Again and again. I explained how the voting had worked, how the final decision was not DC’s.”

The specter of Jason’s death haunted Batman and his allies for many years. Nightwing also felt responsible, since he’d given Jason his blessing. A memorial case was erected in the Batcave to honor Jason’s tenure by displaying his costume. Once Tim Drake became Robin, the failure of Jason Todd served as a constant reminder of how dangerous the job was.

To this day, “A Death in the Family” is still one of the few DC stories where the outcome was a direct result of fan participation. How different would Batman’s history have been with 72 additional votes? Would we have ever met Tim Drake?

Although Jason Todd eventually returned, “A Death in the Family” still has permanent consequences. When he reappeared over a decade later, Jason struggled to forgive Bruce for allowing the Joker to live. Didn’t his mentor love him enough to avenge him? The storyline that posed that question, “Under The Hood” (written by Judd Winnick and art by Doug Mahnke and various), built on “A Death in the Family” to tell an equally emotional tale.

Batman Annual #25, which tied up the “Under the Hood” storyline, even used a page from the unpublished version of Batman #428 that would’ve seen print had Jason lived. 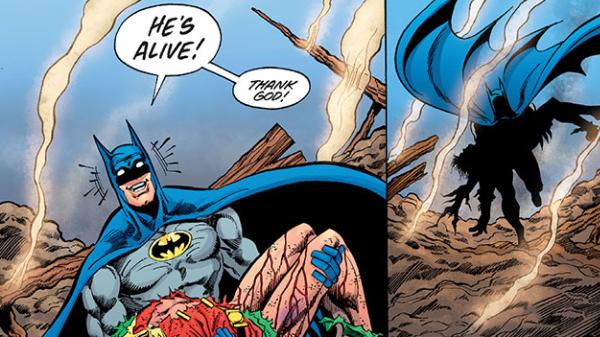 Even though it’s been thirty years, fans are still talking about “A Death in the Family” and the characters are still reeling from its emotional turmoil. Few comic book tales have had greater impact on the DC Universe and its fans.

Now, over thirty years later, we have to ask—would you have voted to kill Jason Todd? If you could go back and do it differently, would you? Unfortunately, there’s no changing the past, but with the new Batman: Death in the Family animated movie, you have a chance to do the next best thing and choose to let Jason live. What happens if you do? What sort of changes will that bring to the DCU? You’ll soon know and once again, the question of Jason’s death will loom large with Bat-fans.