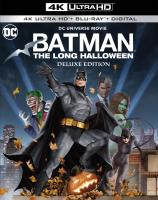 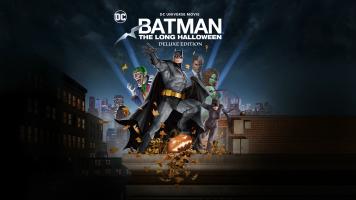 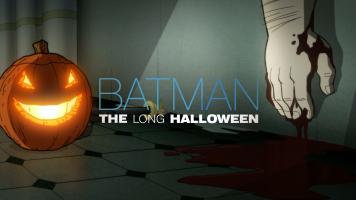 Collecting the acclaimed two-part animated adaptation of one of Batman’s most iconic tales, Batman: The Long Halloween – Deluxe Edition presents arguably the best presentation to date for the engrossing DC Universe Movie title. Stacked with a fantastic cast and slick script, this adaptation aptly lays out a curious whodunit? and successfully ramps up the intrigue right to the final moments. While the gradual, building pace of Batman: The Long Halloween – Deluxe Edition might not sit well with some, this single-narrative version propels the viewers deep into Gotham City’s underbelly for an intriguing and skillfully crafted mystery.

Inspired by the iconic mid-1990s DC Comics story from Jeph Loeb and the late Tim Sale, Batman: The Long Halloween – Deluxe Edition starts with a string of atrocious serial killings on holidays in Gotham City, sending The World’s Greatest Detective into action. Here, Batman must confront both the city’s organized crime ring and a unified front of costumed foes while also attempting to apprehend a holiday-themed serial killer bumping off mobsters left and right. Originally released as a two-part film, here, the mystery behind Batman: The Long Halloween unfolds as an extended single-feature narrative.

While this animated adaptation already worked nicely in the two-part format it was originally released in, Batman: The Long Halloween legitimately plays out stronger as a single 168-minute feature film. Screenplay writer Tim Sheridan deserves a nod his commendable work on this adaptation, which holds strong in this iteration. It still hits all the right notes as it did in its previous form, but there’s something here that makes this iteration feel a little more grander. Batman: The Long Halloween – Deluxe Edition feels more lofty in this extended form, and more like an appropriately weighty interpretation of the popular Batman comic book.

This is helped tremendously thanks to the film’s seamless transition from Part One to Part Two in this form. The use of the end-credit scene from Part One – a funeral scene and the introduction of Poison Ivy – as a bridge to connect both pieces keeps the film moving without any type of awkward bump. The film’s stride never really breaks. Now, the entire adaptation unrolls with a slow, deliberate pace from start to finish for over two-and-a-half hours, though it’s occasionally disrupted by flashes of violence.

When it comes to the touted “mature content” added to this release, it amounts to really nothing more than slightly bloodier violence. This includes more red splatters, bloodier wounds and victims, and the occasional teeny-tiny bits of added animation here and there to accommodate the intense fisticuffs. The Chinatown fight sequence and the New Year’s Eve murder are very noticeably punched up, for example, as is the film’s climactic set piece.

There are other minor changes made to Batman: The Long Halloween – Deluxe Edition, including modified opening and end credit titles. If you’ve seen Batman: The Long Halloween in its original two-part form, then you essentially get that here, just with a few teeny alterations and an extra bucket of blood. There was also no noticeable change to the film’s dialogue. For a more in-depth review of the animated feature it seems fair to recommend taking a look at the coverage for Part One and Part Two.

Shifting from the feature to the actual release itself, Warner Bros. Home Entertainment offers up Batman: The Long Halloween – Deluxe Edition on 4K Ultra HD Blu-ray, Blu-ray and on Digital. While the studio again does excellent work with the movie’s audio and video quality, the bonus content amount is a little light, especially for a “Deluxe Edition.”

Looking first the video, Batman: The Long Halloween – Deluxe Edition comes with a bold 2160p UHD 4K transfer, with deep blacks and crisp colors. The transfer here makes the assorted shades of black, brown and grey distinguishable and deep (Batman’s cape and cowl look especially glorious on occasion). Colors pop and look crisp, are nuanced and complimentary to the darkened look and feel of the film. It looks fantastic, with every last bit of detail as clear as can be, and a visible step up from the regular 1080p version. Any issues with the transfers are essentially non-existent.

Similarly, the DTS-HD MA 5.1 audio mix is a powerhouse of a sound mix. Action scenes pack a punch, sounding full and robust, and quieter scenes are as clean and clear as can be. Everything about this transfer is stellar with nary an issue to be found.

Bonus extras are, unfortunately, not as brimming as the film’s transfer. Outside of the new 25-minute featurette, all other additional content is either promotional or previously-available material. The “Batman: The Long Halloween – Evolution Of Evil” featurette is a legitimately interesting look at the different themes and characters who inhabit Batman: The Long Halloween, along with the origins of the original comic’s creation. Members from the animated adaptation chime in here, including producers Krieg and Lukic and screenplay writer Sheridan, along with original Batman: The Long Halloween scribe Jeph Loeb, among a few other others. It’s an informative featurette which does a nice job of spelling out some of the themes and motivations present in Halloween, and we get a neat look at some film noir classics from 40s, but it’s unfortunately not a particularly deep dive into the movie itself and its production. Still, a lot of what is covered here applies and makes for an entertaining companion watch to the main feature. There are also spoilers, including Holiday’s identity, so don’t watch this before the main feature.

From there, Batman: The Long Halloween – Deluxe Edition features four episodes of Batman: The Animated Series – “Two-Face, Part One,” “Two-Face, Part Two,” “Christmas with the Joker,” and “It’s Never Too Late” – and a smattering of trailers and previews for Batman: The Dark Knight Returns, Batman: Gotham by Gaslight and Batman: Hush. The release wraps up with regular Blu-ray and digital copies of the movie.

Not ported over from the original Blu-ray releases are a couple Sneak Peek featurettes and the two DC Showcase animated shorts – The Losers and Blue Beetle – but those shorts can be found as part of the recent DC Showcase – Constantine: The House of Mystery release. To note, neither Part One or Part Two included any type of featurette or documentary on either release.

While it’s not as robust as it should be, Batman: The Long Halloween – Deluxe Edition is still a fine showing for the excellent animated feature, especially the 4K Ultra HD Blu-ray edition. Given the ambitious animated feature, and even the pedigree of the source material, it does feel as though there should be more bonus features celebrating both. That said, the feature itself looks fabulous, surpassing any of the other different releases out there, which does help make up for the small bundle of bonus content. It is worth the upgrade for those who already own the two Blu-ray releases, but no one would be faulted for waiting for a slight price dip or sale before purchasing.

Even though it’s hard to shake the feeling that this release should’ve been better, Batman: The Long Halloween – Deluxe Edition is definitely worth scooping up. Whether it’s an upgrade from the previous Blu-rays or purchasing the film for the first time, the movie’s 4K Ultra HD Blu-ray release is unquestionably the way to go. With a video and audio presentation that can’t be beat, and a small but enjoyable smattering of bonus content, it’s the best edition on shelves. Batman: The Long Halloween – Deluxe Edition on 4K Ultra HD Blu-ray comes Highly Recommended to Own!


Warner Bros. Home Entertainment provided The World’s Finest with a 4K UltraHD Blu-ray copy of Batman: The Long Halloween – Deluxe Edition for the purpose of this review, though that had no impact on the product’s final assessment.