–DC Showcase – Blue Beetle (New Animated Short) – Sufferin’ Scarabs! Silver Age Blue Beetle is back! And, had he ever starred in a 1960s Saturday-morning limited-animation cartoon with its own jazzy earworm of a theme song, it would have been just like this! Welcome to the adventures of Ted Kord, alias the Blue Beetle, as he teams up with fellow Super Heroes Captain Atom, The Question and Nightshade to battle that nefarious finagler of feelings, Doctor Spectro.
-Sneak Peek at the next DC Animated Movie – An advanced look at Injustice.
-DC Universe Movies Flashback: Batman: The Dark Knight Returns, Part 2, Batman: Hush
-From the DC Vault: Batman: The Animated Series – “Two-Face, Part 1” and “Two-Face, Part 2” 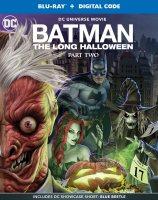 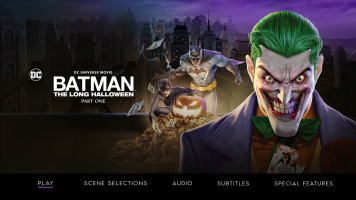 Much like with Batman: The Long Halloween, Part One, Warner Bros. Home Entertainment has given Batman: The Long Halloween, Part Two a scaled-back home media release. Available on Blu-ray and digital media (including 4K), the studio hands the anticipated DC Universe Movie adaptation a pretty basic presentation, coming with a nice audio/video presentation and a handful of extras. Clearly, the behind-the-scenes bonus content is being saved for the previously-announced planned 4K Ultra HD Blu-ray “Deluxe Edition” 2022 release.

Starting with the Blu-ray’s audio and video presentation, it’s no surprise that the quality found on Batman: The Long Halloween, Part Two is basically on par with Part One‘s release. The quality is a mixed bag that finds the film’s strong visual style hampered by a fairly plain transfer. The color reproduction and details are both good, without a doubt, but the disc’s compression quality does noticeably impact the film’s visuals. Artifacting and blocking are pretty regular throughout the movie, not constantly but enough to be distracting from time to time. Thankfully, the DTS-HD 5.1 Master Audio mix remains just as strong for Part Two. Dialogue is consistently clear and crisp throughout, regardless of volume level. Action scenes sound nice and hefty, with quieter scenes sounding suitably atmospheric. It’s another robust, immersive mix from the DC Universe line. The digital release is available in 4K, with the streaming video quality maybe a small fraction better than the regular 1080p Blu-ray.

Batman: The Long Halloween, Part Two, as with Part One, is a little light when it comes to thorough bonus content. That’s not a surprise, given the previously mentioned “Deluxe Edition” coming in 2022, but it’s not lack the light bonus content here is underwhelming. What’s here is great, there’s just unfortunately a small selection, which could deter potential purchases.

That all said, the DC Showcase – Blue Beetle animated short which kicks off the bonus content is an absolutely laugh-out loud blast that’s really, really worth checking out as soon as possible. And what’s the premise? Basically, the short plays out as an episode of a 1960s Blue Beetle animated series in the style of the classic Spider-Man 1967 cartoon. Here, Blue Beetle teams up with Captain Atom, The Question and Nightshade to battle Doctor Spectro and, yeah, it’s basically the definition of fun. Directed by Milo Neuman, with a story by Jeremy Adams and screenplay by Jennifer Keene, DC Showcase – Blue Beetle is packed with a host of great homages, nods and references – it’s a total joy! Don’t miss out on this one, folks.

Continuing, next up is a roughly eight-minute look at the forthcoming Injustice movie. Inspired by the popular video game franchise and spin-off comic series, it follows a world under the dictatorial thumb of Superman, with heroes divided between those who support the Man of Steel’s rule and those who resist. The games are plenty of fun and the spin-off comics are some of the best Justice League adventures of the last few years. The preview itself gives a hefty look at finished footage, production material and brief interviews with the film’s cast and crew. Based on the previous, the character designs are handled by the creators behind the Mortal Kombat Legends direct-to-video animated movies. The disc also includes older preview featurettes for Batman: The Dark Knight Returns, Part Two and Batman: Hush (no Reign of the Supermen?).

The disc is rounded out by the two-part Batman: The Animated Series episode “Two-Face” and a digital copy of the film. A DVD edition is not included, nor are there any trailers.

As with Part One, the home media release of Batman: The Long Halloween, Part Two is fairly light in quantity, but the quality still remains. The main feature and accompanying bonus content are all top-notch. Besides, the low price-point for Blu-ray releases should help make the decision process a little easier for consumers, though picking up the digital release would also be a suitable option. While cash-conscious fans might understandably be more apt to wait a year or so for the upcoming 2022 “Deluxe Edition” release, picking up these separate Blu-ray releases absolutely do make for worthwhile purchases. Batman: The Long Halloween, Part Two is a strong conclusion to the two-part animated adaptation, plus it comes with an awesome animated short, and it’s worth giving a spin at the earliest convenience! Recommended!

Please note Warner Bros. Home Entertainment provided The World’s Finest with a Blu-ray copy of Batman: The Long Halloween, Part Two for reviewing purposes, though the author did purchase the iTunes digital edition to complete coverage. 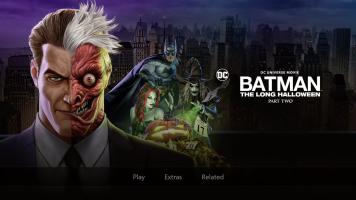 [ Continue on to the Batman: The Long Halloween, Part Two Feature review ]