Warner Bros. Home Entertainment released details on the digital and phyical release of Suicide Squad: Hell to Pay. Continue below to view the original press release in its entirety.

Prepare to root for the bad guys when Amanda Waller sends her band of misfit DC Super-Villains on an all-new, action-packed secret mission in Suicide Squad: Hell to Pay, the next film in the popular, ongoing series of DC Universe Movies. Produced by Warner Bros. Animation and DC Entertainment, the feature-length animated film arrives from Warner Bros. Home Entertainment on Digital starting March 27, 2018, and on Ultra HD Blu-ray™ Combo Pack, Blu-ray™ Combo Pack and DVD April 10, 2018. 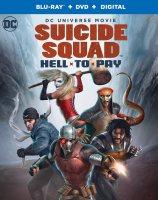 Suicide Squad: Hell to Pay finds Amanda Waller’s top secret “Task Force X” – Deadshot, Bronze Tiger, Killer Frost, Captain Boomerang, Harley Quinn and Copperhead – on a mission to retrieve a mystical object so powerful that they’re willing to risk their own lives to steal it. But the Suicide Squad isn’t the only group of villains seeking to possess the object. The race is on for the golden prize … and, to stay alive, second place isn’t an option.

The all-star cast is led by Christian Slater (Mr. Robot, Archer, True Romance) in his DC Universe Movies debut as the voice of Deadshot, who heads “Task Force X” alongside Billy Brown (How To Get Away With Murder) as Bronze Tiger, Liam McIntyre (Spartacus: War of the Damned, The Flash) as Captain Boomerang, Kristin Bauer van Straten (True Blood, Once Upon a Time) as Killer Frost, Gideon Emery (Teen Wolf) as Copperhead, Tara Strong (Batman: The Killing Joke) as Harley Quinn and their “boss,” Vanessa Williams (Ugly Betty, Desperate Housewives) as Amanda Waller. Villainous forces in the film include C. Thomas Howell (Outcast, The Outsiders, Justice League: The Flashpoint Paradox) as Zoom, Dania Ramirez (Devious Maids, Heroes, Once Upon a Time) as Scandal Savage, James Urbaniak (Difficult People, The Venture Bros.) as Professor Pyg, Julie Nathanson (The Zeta Project, Beverly Hills 90210) as Silver Banshee and Jewelee, and Jim Pirri (Injustice 2) as Vandal Savage & Vertigo.

Suicide Squad: Hell to Pay Enhanced Content
Ultra HD Blu-ray Combo Pack, Blu-ray Combo Pack and Digital
-A Sneak Peek at the next DC Universe Movie, The Death of Superman: “The Death of Superman” – The Death of Superman is widely considered one of the most popular stories in the Superman canon and the DCU. This sneak peek at the exciting new film discusses the story and its place in pop culture.
-Outback Rogue: Captain Boomerang (Featurette) – Audiences get a deeper look at this unconventional, yet entertaining villain from Down Under and how he’s evolved from The Flash universe to the Suicide Squad.
-Nice Shot, Floyd! The Greatest Marksman in the DCU (Featurette) – Floyd Lawton, AKA Deadshot, is one of the most popular antiheroes in the DC pantheon. An excellent marksman and assassin, he often brags that he never misses his shot. Take a closer look at this fascinating character.
-The Power of Plot Devices, MacGuffins and Red Herrings (Featurette) – An insightful examination of the power of a good plot device and the important influence it has over story.
–Suicide Squad: Hell To Pay Commentary – The creative filmmaking team of screenwriter/co-producer Alan Burnett and executive producer James Tucker share their thoughts and stories on the characters, themes and development of Suicide Squad: Hell To Pay.

MARKETING SUPPORT
Suicide Squad: Hell to Pay will be supported by a national online, promotional, and publicity campaign.

Suicide Squad and all related characters and elements are trademarks of and © DC Comics. © 2018 Warner Bros. Entertainment Inc.

Leading the Suicide Squad can be a pretty thankless and dangerous job, but luckily, Floyd Lawton is usually up to the task.

Then again, it’s not like he’s got much choice in the matter.

Still, despite it all, Deadshot is the sort of
guy who always seems to find a way to (literally) keep his head on his shoulders, even when he’s working with
the infamously ruthless Amanda Waller and Task Force X. But all of that might be about to change. In the new DC animated
movie Suicide Squad: Hell to Pay, Waller’s secrets have come to collect and Deadshot has found himself
caught in the middle of a gambit that could either cost him his life or get him out from under Waller’s thumb for
good.

To get an understanding at just what might be going through Deadshot’s head at such a critical moment,
we sat down to talk to the man himself: Christian Slater, who voices Deadshot in the film.

Hell to Pay is actually your return to voicing Deadshot after you did some work with
him on Justice League Action, correct? Can you tell us how you came to the animated DC Universe
to begin with? What’s your origin story?

Christian Slater: Well, I’ve always
wanted to be involved in the DC Universe in some way. I think I put the word out to the people that I work with
that I wanted to do something, so when this opportunity came about we had a meeting, which wound up being for
Justice League Action. So, when they asked if I would be interested in Deadshot, I was like,
“Hey, let’s do this.”

I was very excited. It was great to have the opportunity to work on that project,
I really enjoyed it. I actually felt a natural affinity for the character, so it was great to be called back
for another chance to be part of a larger animated feature with him. Especially an R-rated movie. I thought,
“Oh, wow, that’s even more exciting.”

I was really happy to be able to be a part of it.

This
is a very R-rated movie, particularly compared to the family friendly Justice League Action. Do
you approach the character differently for those different demographics? Was there anything different about
this process?

You know, in a certain respect, Deadshot is just Deadshot, whether he’s in a “G” situation
or an “R” situation [laughs]. But no, in this one we certainly got to see a lot more of the shocking stuff.
Even as I was watching it, I gasped a few times at a lot of the decisions [the animators] made. I was totally
surprised. A lot of the directions some of the scenes went, I was like “Whoa! Okay!” It gets pretty
intense and it’s not very subtle.

But really, I was thrilled. I think it’s important to set the Suicide Squad apart and put them in their own
universe, as opposed to the [more family friendly] world that Batman and Superman live in. These guys, the Suicide
Squad, they play on such a different field and they have to make a lot of those darker choices. It felt like I
finally understood what the Suicide Squad really is and why it is they do what they do.

I mean, that opening
scene? It’s definitely an introduction to some very fascinating characters who [laughs] they’re not around
very long. The one-liners that were included—I thought they were hilarious, and they really didn’t pull any punches.
They really went for it. But that’s what’s so great about the Suicide Squad.

Speaking of the characters,
this movie really goes for some deep cuts into the more obscure corners of the DC Universe when it comes to the cameos.
So, I’ve got to ask, where do you rate on the “geek” scale here? Was there anyone you were familiar with and surprised
to see show up?

To a certain degree, yeah! I knew some of the characters. I definitely spent some time
growing up reading comic books, watching those Saturday morning cartoons, basically being pretty obsessed. When
I was three years old, my mother made me a Superman cape, I’ve always been a geek in that respect, and I think I
always wanted to, you know, deep down be a superhero. So, to actually get the opportunity to do that in this
format was a lot of fun.

When you’re dealing with a crew like the Suicide Squad, the morality gets a little shaky, right? Do you
think Deadshot is really a guy who can be redeemed? Is he a superhero? Or is he a stone-cold villain to
you?

Hmm… I would certainly say that he’s made some questionable choices. He’s got himself
in a very difficult situation. He’s trying to shift his way out of the hole he dug himself into, but at the
end of the day, his main mission, against all the other missions he goes on, is to get back to his daughter and
to actually be there as a father. I think that’s one of the elements that really sets him apart. At his core,
his heart is in the right place. He wants to be a hero, but he’s so frequently misunderstood. He’s frustrated
by some of the choices that many of the actual quote-unquote heroes make—that’s got him in a really difficult
place.

But I think in his heart and in his soul? He’s a good character. At the core, you can really
end up rooting for somebody like him.

Continue below for a gallery of officially released images from the Suicide Squad: Hell to Pay animated feature along with select screengrabs. The images below are courtesy of Warner Bros. Animation, Warner Bros. Home Entertainment and The World’s Finest.
Images

Continue below for an assortment of videos from Suicide Squad: Hell to Pay, including the theatrical trailer and clips from the animated feature. Click on the players below to view the video content.