Warner Bros. Home Entertainment announced Legion of Super-Heroes, the studio’s first 2023 entry in the DC Universe Movie line, will hit physical and digital media on February 7. The feature is directed by Jeff Wamester from a script written by Josie Campbell. Continue below for the Legion of Super-Heroes trailer, package art and press details:

Supergirl ventures to the 31st century to find answers to her present-day dilemmas, only to encounter new problems and an old enemy in Legion of Super-Heroes, an all-new, feature-length DC Universe Movie coming to 4K Ultra HD Blu-ray Combo Pack, Blu-ray+Digital, Blu-ray (Canada only), and Digital starting February 7, 2023 from Warner Bros. Home Entertainment. 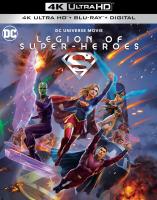 Welcome to the 31st century and the Legion Academy, where a new generation hones their powers with hopes of joining the Legion of Super-Heroes. Devastated by tragedy, Supergirl struggles to adjust to her new life on Earth. Taking her cousin Superman’s advice, Supergirl leaves their space-time to attend the Academy. There, she quickly makes new friends, as well as a new enemy with old ties: Brainiac 5. But a nefarious plot lurks in the shadows – the mysterious group known as the Dark Circle seeks a powerful weapon held in the Academy’s vault. Find out if the budding heroes can rise to the challenge in this all-new DC Universe Movie!

Spend some time with the expansive canon of popular DC Universe Movies, DC Animated Movies and many other animated DC films and television series by checking out HBO Max! 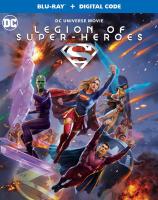 © Warner Bros. Entertainment Inc. LEGION OF SUPER-HEROES and all related characters and elements are © & TM DC.

Legion of Super-Heroes arrives February 7, 2023 on Blu-ray and Digital from Warner Bros. Home Entertainment. Check out The World’s Finest DC Universe Movie subsite for more on the acclaimed movie series, and stay tuned for further updates right here at The World’s Finest. Click the link below to discuss this news.

Click here to discuss this news at The DC Animation Forum and then head over to PopGeeks for even more conversation!