hosted by popgeeks.com | Crunchyroll Obtains Global Rights To That Time I Got Reincarnated As A Slime The Movie: Scarlet BondSteamforged Introduces Epic Encounters: Local Legends
Close
Skip to content
Menu

In Mortal Kombat, MMA fighter Cole Young, accustomed to taking a beating for money, is unaware of his heritage—or why Outworld’s Emperor Shang Tsung has sent his best warrior, Sub-Zero, an otherworldly Cryomancer, to hunt Cole down. Fearing for his family’s safety, Cole goes in search of Sonya Blade at the direction of Jax, a Special Forces Major who bears the same strange dragon marking Cole was born with. Soon, he finds himself at the temple of Lord Raiden, an Elder God and the protector of Earthrealm, who grants sanctuary to those who bear the mark. Here, Cole trains with experienced warriors Liu Kang, Kung Lao and rogue mercenary Kano, as he prepares to stand with Earth’s greatest champions against the enemies of Outworld in a high stakes battle for the universe. But will Cole be pushed hard enough to unlock his arcana—the immense power from within his soul—in time to save not only his family, but to stop Outworld once and for all?

McQuoid directed from a screenplay by Greg Russo and Dave Callaham, from a story by Oren Uziel and Russo, based on the videogame created by Ed Boon and John Tobias. Richard Brener, Dave Neustadter, Victoria Palmeri, Michael Clear, Jeremy Stein and Larry Kasanoff served as executive producers. 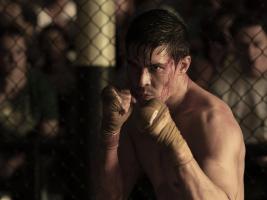 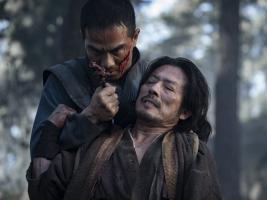 Bringing the franchise back to the big screen after over two decades, Warner Bros. Pictures’ Mortal Kombat features some good fisticuffs and character beats, but it ultimately falls short of victory. The film struggles with its generic and slight story, dour tone and, overall, an underdeveloped cast, which inevitably turns what should’ve been an exciting, gripping journey into instead a passable jaunt. While there are some redeeming factors to be found, it squanders its potential. Mortal Kombat is nowhere remotely near a flawless victory, but by no means is it a fatality for the franchise’s big-screen ambitions.

Mortal Kombat follows MMA fighter Cole Young as he quickly finds himself on the run and fighting for survival after learning that his dragon-shaped birthmark is actually an invitation to an epic fighting tournament that will determine the fate of the universe. Hunted by the unstoppable Sub-Zero and preparing for battle with Earth’s greatest champions against the enemies of Outworld, Young and his heritage might just be the key the heroes need to claim victory.

After building up a tremendous amount of goodwill with an excellent extended flashback/prologue featuring Hanzo Hasashi (pre-Scorpion) and Kuai Liang (pre-Sub-Zero) fighting it out to the death, Mortal Kombat brings the audience to modern-day times and, over the course of the remaining 90-plus minutes, squanders said goodwill. Instead of going for broke and embracing the craziness of the Mortal Kombat video game franchise, here the movie instead tries a somewhat straight-forward and grounded approach, which sucks the movie of its soul (something Shang Tsung would likely appreciate). While there are definitely some strong beats to be found and nifty nods throughout, plus some genuinely exciting moments, they are few and far in-between as the movie proceeds to limp to its inevitably underwhelming finale.

Simon McQuoid, making his feature directorial debut, starts off strong but quickly loses his way. There’s an immediate dip in quality when the movie shifts from it’s gripping flashback/prologue to modern times, trading the former’s interesting characters, tone and semi-lavish setting for the latter’s half-baked and muddy ‘serious’ approach, the same approach we’ve seen time and time again in other failed video game movie adaptations. The director is clearly a fan of the franchise, but his attempted gritty, realistic take on the material is a major misstep which robs the movie of Mortal Kombat’s lavish insanity. The intent is understandable, but misplaced, since nothing about Mortal Kombat can really be ‘realistic.’ Just think about how bonkers these games really are, and how a grounded, straight-forward style directly clashes with that. Mortal Kombat‘s near-non-existent plot makes this gaffe all the more apparent.

Using Young as the audience’s conduit into the world of Mortal Kombat, the movie posits him as the ‘everyman’ thrown into a situation that’s beyond belief. That’s not a bad thing, not at all, but the lack of any tangible character development outside of a few brief moments rob him of any real interest. Lewis Tan does solid work with the role, given the scant material he has to work with. There’s real potential for Young’s character, as he’s so different from the rest of the franchise’s over-the-top personalities, but he just kind of fizzles out and gets lost in the morose festivities. His big moment toward the film’s climax similarly lacks the ‘oomph’ needed to really justify his presence and the time spent with him. The film could’ve easily jettisoned Young and used that desperately-needed time to flesh out other characters and aspects of the story.

Joining Young on his journey from washed-up MMA fighting to Mortal Kombat tournament fighter are Sonya Blade, Jax and Kano, though Lord Raiden, Liu Kang and Kung Lao eventually join in. Blade and Jax are mostly around for exposition dumps and fights, with no real character arcs to speak of, with Kano hanging out as, primarily, comic relief. Kano is one of the film’s few bright spots and elicits some genuine laughs (despite being a truly reprehensible person), providing some much-needed levity for the film’s misguided and overly serious tone.

With the debatable exception of Scorpion, Sub-Zero and Kang, the majority of the movie’s characters don’t get much development outside of a couple quips and a few lines about their back-story and their abilities. Joe Taslim (as Bi-Han/Sub-Zero) and Hiroyuki Sanada (as Hanzo Hasashi/Scorpion) easily get the film’s best material and make a strong impression whenever they pop up, with Taslim’s intimidating The Terminator-esque take on Sub-Zero a true stand-out, though Sanada is just engaging as the noble-but-scorned Scorpion. The cast is clearly game to embrace the many absurdities that come with Mortal Kombat, but they simply aren’t given the material to work with.

The bad guys fare worse, unfortunately. Tsung, ruler of Outworld and the primary antagonist, gets the most screen-time out of the lot, but spends it rattling off threats and evil plans ad nauseum. His goons are no more than punching bags and temporary obstacles for our heroes. To call these foes underwritten would maybe be an overstatement. There’s barely anything there, and that’s a shame since the video game iterations are some of the most enjoyably theatrical and extravagant bad guys this side of the arcade. Every character here is underutilized to varying degrees, on both sides of the fight, with Mortal Kombat offering only fleeting glimpses of its squandered potential.

The lack of development doesn’t stop with just the characters, but also to nearly every other aspect of Mortal Kombat. The dearth of any real concrete explanation of the rules to this world is another blow to the movie, as so much is either under-explained or simply accepted with face value with no follow-up. Some of our heroes are giving life-changing abilities, and it barely seems to register. There’s little push-back or genuine conflict as Young and his fellow kombatants confront world-altering revelation after revelation. True, most likely don’t expect any type of deep character development or layered story-telling when it comes to this franchise, but events in this movie just glide by in a way that makes nothing feel impactful or really engaging.

While the characters and overall story might be lacking, the actual fighting – for the most part – is pretty solid albeit smaller-scale than expected and occasionally hard to track. Following an ambitious, thrilling prologue – containing unquestionably the film’s best fight sequence – the latter fisticuffs ultimately fall short. There is some impressive choreography and work being done by the cast and crew, but it gets lost amidst the some questionable directing. The camera is usually too tight and the editing noticeably aggressive, making fights choppy and difficult to follow at times. That all said, the film’s fatalities tend to be suitably fun and gruesome, and offer some of the film’s best moments.

Mortal Kombat may not be the best film inspired by the long-running video game franchise but, overall, it’s adequate, though below the quality it should’ve been. Long-time fans will likely enjoy it, for the most part, but there’s not much here for new viewers to grasp. 2020’s Mortal Kombat Legends: Scorpion’s Revenge remains the best movie inspired by the beloved brutalizer, though this latest attempt does a serviceable if underwhelming job. Mortal Kombat makes the critical error of trying to ground all the lunacy when instead it should be embracing and running with it. The 1995 original did, as did the aforementioned 2020 animated feature, and it paid off quite well for both. There are fleeting glimpses here of what a modern, big-budget Mortal Kombat movie could and should look like, but it appears we’ll need to wait for a potential sequel for another shot at cinematic victory. Watch at your own risk! 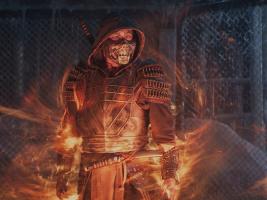 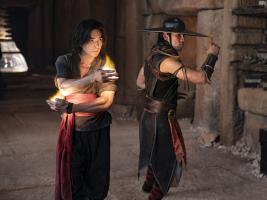