Synopsis: The world must cope with the loss of Superman – and the sudden emergence of four would-be heirs to the title – in Reign of the Supermen, part of the popular series of DC Universe Movies. Produced by Warner Bros. Animation and DC, the feature-length animated film arrives from Warner Bros. Home Entertainment.

Reign of the Supermen Enhanced Content
Ultra HD Blu-ray Combo Pack, Blu-ray Combo Pack and Digital
-Lex Luthor: The Greatest Nemesis (Featurette) – Evil Genius. Archenemy of Superman. Misunderstood hero? This documentary will look at one of the most renowned villains in literature and debate his ethics and motivations throughout his publication history and as the calculated anti-hero of Reign of the Supermen. We’ll also explore how Lex Luthor is emblematic of technology without limit, often demonstrating what effect unbridled power, resources, and influence can have on humanity. We’ll discuss the affinity for storytellers to associate Lex Luthor and with the field of science as they challenge our morals and integrity with real world issues such as cloning and what can happen if science fiction became science reality.
-A Sneak Peek at the next DC Universe Movie, Justice League vs. The Fatal Five – An entertaining, insightful exciting look at the next animated film in the popular DC Universe Movies collection.
-From the DC Vault: Superman: The Animated Series, “Heavy Metal”
-From the DC Vault: Justice League Unlimited, “Panic in the Sky” 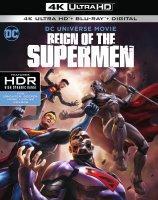 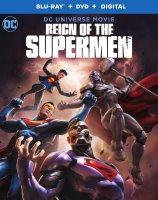 Warner Bros. Home Entertainment has included a small helping of bonus content for the home media release of Reign of the Supermen, which includes a closer look at Lex Luthor and a preview for the next installment of the DC Universe Movie line. Both the physical and digital releases of Reign of the Supermen comes with a couple companion bonus features, though the Blu-ray release also includes some two cartoon episodes from the “DC Vault.”

Looking at the 4K Ultra HD Blu-ray release of Reign of the Supermen, Warner Bros. Home Entertainment has whipped together a handsome package. The box art is, of course, striking and dynamic, and thankfully the same can be said for what’s found on the inside, too.

Looking at the film’s audio and video transfer, the upscaled 2K transfer looks great, with the colors really popping thanks to the HDR encoding. The Blu-ray looks good, too, but the 4K Ultra HD edition really pops in comparison. The transfer also appears to be mostly free of macroblocking and color banding, with nothing really distracting to the eye . Basically, while the movie looks solid on Blu-ray, the benefits of the 4K Ultra HD format push that version up a little bit more. In terms of audio, it’s another well-balanced DTS-HD Master Audio 5.1 transfer. The track nicely balances the quieter dialogue moments with the big show-stopping action sequences. Reign of the Supermen does flip back and foth between the two on occasion, it it never sounds too quiet or too loud. Nicely balanced, crisp and clear.

Moving on to the bonus features, first up is “Lex Luthor: The Greatest Nemesis,” a roughly 16-minute examination of the classic Superman foe and his storied history. The featurette dives into what makes him tick, poses some theoretical questions of his existence if Superman wasn’t around and his influence both in the comic universe and pop culture in general. Comments and thoughts from the film’s creative team and noted personalities are included. It’s a solid look at the character for those who aren’t entirely familiar with his history and a nice refresher for those who know his origins.

Following that is a nearly 10-minute look at Justice League vs The Fatal Five, the next DC Universe Movie title. The preview offers a glance of the film’s plot, the characters who will appearing, and insight from the film’s cast and crew. Essentially, the Justice League must deal with the threat of classic Legion of Super-Hero villains the Fatal Five while also juggling new additions to the team roster. New characters appearing include Miss Martian, Jessica Cruz as Green Lantern and Legion of Super-Heroes member Star Boy. According to the preview, the film will also take a look at mental health and its effects on some of the characters.

It’s worth noting that while Justice League vs The Fatal Five is done in the style of the classic DC Animated Universe, specifically the Justice League animated series – it doesn’t specifically confirm if it is in continuity of that universe. That information will likely come about one way or another as we get closer to the film’s release date. With that in mind, any outlet saying this movie is a continuation of the DC Animated Universe is erroneous, as that has not yet been verified, so please keep that in mind. That said, this looks like another great entry in the DC Universe Movie line.

The physical media release of includes two bonus episodes, Superman: The Animated Series‘ “Heavy Metal” and Justice League Unlimited‘s “Panic in the Sky.” Both are excellent episodes and worth watching after taking in the main feature. The 4K Ultra HD Blu-ray also includes a selection of trailers and both a digital and regular Blu-ray copy of the movie.

Overall, while a little underwhelming, the bonus content included is still good. However, with news of a “The Death of Superman”/”Reign of the Supermen” double feature title slated for later this year – in the same vein of Warner Bros. Home Entertainment’s handling of Batman: The Dark Knight Returns, it’s likely additional bonus features are being saved for that. Some viewers may want to opt and wait for that forthcoming release. That said, for those looking to own Reign of the Supermen right now, the 4K Ultra HD Blu-ray edition of the movie offers the best possible presentation. Plus, the additional content makes for nice supplementary viewing after checking out the main feature. Recommended!

Note: Warner Bros. Home Entertainment provided The World’s Finest with a 4K Ultra HD Blu-ray edition of “Reign of the Supermen” for review, though that does not have any impact on the reviewer’s assessment of the release.

[ Continue on to the Reign of the Supermen Feature review ]