Synopsis: Based on DC’s famed Elseworlds tale from 2003, Superman: Red Son takes place in an alternate reality where the spaceship bearing the last survivor of Krypton crash lands – not in rural Kansas, but in Stalinist Russia. Can this Cold War-era Earth survive the coming of a Soviet Superman? 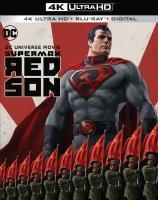 Golden Globe-nominated actor Jason Isaacs leads a stellar cast as the voice of the alternate, Soviet take on Superman. Isaacs, one of the stars of the Harry Potter film franchise, Star Trek: Discovery and more than 120 films and television series, gets his turn as a Super Hero after three memorable appearances in DC Universe Movies as famous Super-Villains from the DC library. Isaacs previously voiced Sinestro in Green Lantern: Emerald Knights, Lex Luthor in Justice League: Gods and Monsters and Ra’s al Ghul in Batman: Under the Red Hood.

Superman: Red Son is produced and directed by Sam Liu (Reign of the Supermen) from a script by J.M. DeMatteis (Batman: Bad Blood, Constantine: City of Demons). Jim Krieg (Batman: Gotham by Gaslight) is co-producer. Amy McKenna (The Death of Superman) is producer. Executive Producers are Sam Register and Bruce Timm (Batman: The Animated Series).


A strong adaptation of the classic Elseworlds story, Superman: Red Son is an intriguing, sophisticated look at morality, humanity and nature vs. nurture. While the DC Universe Movie title can be a shade inconsistent in terms of overall quality, it remains a riveting watch right up to the final curtain. With great direction, a fantastic voice cast, a compelling script and an incredible score, Superman: Red Son is alternate vision of the Man of Steel worth experiencing.

The premise for Superman: Red Son is deceptively simple – Superman lands in the Soviet Union instead of the United States – but the ripple effect is far more complicated than one could ever expect. How is the world, or at least the DC Comics characters that inhabit it, impacted by this change? Well, quite substantially, actually, with it altering even the most recognizable and steadfast characters. You think Wonder Woman or Batman would remain relatively unfazed? Think again. Watching familiar faces and names navigate this new world makes for an engaging watch, especially as things could take a shocking turn at a moment’s notice (which tends to happen quite a bit during Superman: Red Son).

The script by J.M. DeMatteis, adapted from Mark Millar’s original comic series, sticks pretty close to the source material, and is riddled with so many neat touches and little nuances that a second viewing is basically mandatory (but in a good way). However, like the 2018 Batman: Gotham by Gaslight animated adaptation, it does make a few changes. Thankfully, said changes aren’t superfluous or pointless, but instead matter and impact the film’s story and flow. In fact, this film is arguably more complex than the source material. As per usual, spoilers will be relatively light as to not ruin some of the film’s legitimate surprises.

Director Sam Liu guides the ship, using his considerable talents to punch up the action sequences and to ensure all the dramatic moments land, too. Superman is in a different emotional place then we’re used to, which directs every little action he does. Given his rougher upbringing and surroundings, we see a Superman that’s a bit more brutal and decisive. We see Superman make decisions that we don’t expect, and it’s legitimately terrifying. Superman’s confrontation with Stalin after discovering the truth about his oppressive rule is shocking, and our subsequent sense of unease is justified time and time again following that, especially during a tense dinner scene between Superman and the South Korean leader. Liu expertly strings the entire movie with a sense of doom, which reminds us just how frightening the Man of Steel could actually be. The character still means well, and remains optimistic for a brighter world and future, but becomes lost in a fog as his actions become increasingly misguided. It’s a captivating, almost tragic portrayal of Superman.

Jason Isaacs leads an incredible cast, providing the voice of Superman himself. Turning in an ultimately heartbreaking performance, Isaacs sells Superman’s beliefs and convictions so whole-heartedly that, as everything starts to crumble around him, you genuinely sympathize for the Comrade of Steel. Superman: Red Son gives us a Superman that has arguably never been more human and vulnerable than he is right here. You want Superman to do what’s right, making each woefully misguided step that much more crushing. Cast opposite Isaacs is Diedrich Bader, whose Lex Luthor is so excellent that it would be a shame if he doesn’t reprise the role again in a future project. Like with Isaacs, Bader’s performance brings a sense of humanity to Luthor that grounds his character in such a uniquely different way, making him charming and even a shade sympathetic in his own right. It’s a legitimately impressive performance. Amy Acker, Roger Craig Smith, Vanessa Marshall and Paul Williams also turn in strong performances as key supporting players Lois Lane, Batman, Wonder Woman and Brainiac, respectively.

While Superman: Red Son is a solid outing for the DC Universe Movie line, it’s unfortunately not perfect. First, it does take a little while for the film to find its rhythm. In order to cover a lot of ground, it does jump forward in time quite frequently, which is fine, but there are moments when Superman: Red Son feels like it’s just moving from plot point to plot point instead of letting events play out organically. It’s not a huge hindrance, but it can make things feel a little disjointed, though it does eventually hit a steady beat. Similarly, the animation quality does vary, ranging from fantastic to serviceable. The action clips tend to be enthralling and well-handled for the most part, though the odd slip-up – Batman’s ultimate decision during his final confrontation with Superman that doesn’t hit as hard as it should, for example – and some of Superman: Red Son‘s quieter moments stumble as the animation occasionally lacks the subtly needed to sell the character work.

The film’s portrayal of Wonder Woman is also altered from the source material. Instead of being smitten with the Comrade of Steel, of which Superman is oblivious to, she instead sees Superman as a beacon of hope to bring peace to the world. However, like the book (but for different reasons, of course), their relationship becomes strained over time. It’s also very, very welcome to see the movie embrace the LGBT aspects of the Amazonian Warrior’s background, which is definitely an improvement and an interesting alteration from the source material. However, Wonder Woman’s depiction here does come off as a little one-dimensional given her limited screen time. That said, Vanessa Marshall’s performance as Wonder Woman here is fantastic, as she perfectly conveys the character’s burgeoning and increasing frustration with Superman, coupled with her growing (and understandable) disappointment with man’s world, throughout their relationship.

Wonder Woman isn’t the only notable change made in the jump from page to screen – Lex Luthor’s depiction here comes across as more heroic, though still deceptive and cunning. The ending has been changed too, but to avoid any specific spoilers, details will be vague. The movie ends on a more hopeful note which, while it will definitely not go over well with some people, makes more sense given how the film veers toward a more optimistic outcome (another smart decision made by the creative team when adapting the source material).

Another strong aspect of the Superman: Red Son animated feature is its incredible score by Frederik Wiedmann. A regular contributor to the DC Universe Movie line, among other projects, Wiedmann’s work here easily his best for the line to date (which is saying something given the consistently great work he puts out). He strings along themes and cues clearly inspired by Soviet propaganda and Russian music throughout the entire film in such a chilling, effective manner. His work on the film’s opening credits alone will make you lean forward to make sure you don’t miss a single note, it’s that good.

Despite some of the film’s few shortcomings, overall, it’s still a strong end product for the DC Universe Movie line. Superman: Red Son is a fascinating exploration of what happens when the ideals which Superman upholds, that we’re all so familiar with, are shifted to a different political ideology. The timing of this animated feature is perfect, too, as the story and themes behind Superman: Red Son remain just as relevant today as they were when the story originally saw print in 2003. It’s an intriguing dissection of the character, and the film’s cast and crew have clearly poured their all into it. A compelling dive into the Man of Steel’s beliefs and ideals, albeit a little twisted, Superman: Red Son comes Highly Recommended!

[ Continue on to the Superman: Red Son Home Media review ]