Synopsis: What if the Man of Steel was raised behind the Iron Curtain? So begins DC’s acclaimed Elseworlds story, Superman: Red Son, an entry in the ongoing DC Universe Movies line. Produced by Warner Bros. Animation and DC, the feature-length animated film arrives – accompanied by the DC Showcase animated short The Phantom Stranger, from Warner Bros. Home Entertainment.

Editions covered in this review. Additional imagery below.


Offering up the standard solid 4k video transfer and audio mix with a small batch of bonus content, Warner Bros. Home Entertainment unleashes Superman: Red Son to home media in both physical and digital formats. For those who want to best presentation for the animated adaptation of one of the best Superman comics of all time, the 4K Ultra HD Blu-ray release is the right way to go.

Looking first at the film’s audio and video transfer offers, it’s another reliably strong end product. In terms of the video quality, the colors are especially vibrant thanks to the HDR encoding, making the film’s color really pop, especially the backgrounds and overall color palette. The transfer also appears to be mostly free of macroblocking and color banding, though some appears visible on occasion in some of the darker scenes, though it’s nothing really distracting to the eye. It’s not reference material, but close. For audio, it’s another nicely-balanced DTS-HD Master Audio 5.1 transfer. The film’s quieter moments are remarkably crystal clear, with all dialogue and audio sounding perfectly audible. The set pieces also hit hard, in thanks partially to the clever use of the mix’s different directional channels during the action sequences, such as the film’s climactic duel. Between the three releases covered for this review – 4K Ultra HD Blu-ray, Blu-ray and Digital – the physical 4K release is unquestionably the best possible presentation. Still, the regular Blu-ray and Digital editions of Superman: Red Son offer up perfectly fine audio and video transfers for those looking for an alternative to the 4K Ultra HD format.

While the film’s presentation hits all the right marks, the bonus content included will likely underwhelm some. While there’s no commentary for this release, what’s included is genuinely interesting featurette, some bonus cartoons and comics, a preview for Justice League Dark: Apokolips War and yet another great DC Showcase animated short. 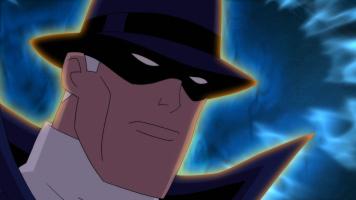 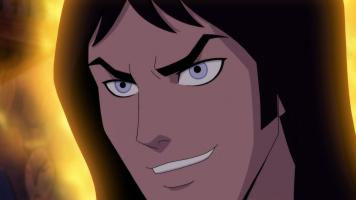 As with the previous Sgt. Rock and Death: The High Cost of Living animated shorts – part of a new wave of DC Showcase titles – the 15-minute The Phantom Stranger short is a fun little gem. It might not hit the heights of Death, but it’s by no means a slouch. The animated short finds The Phantom Stranger attempting to warn a party-going teen of impending doom, but naturally, things don’t really go the way anyone expects. The nifty little short is executive produced and directed by Bruce Timm, the script written by Ernie Altbacker, and stars Peter Serafinowicz as The Phantom Stranger and Michael Rosenbaum as the mysterious Seth. The animation for this short is mostly on point, save for the occasional bits of jerky or stilted character movements. The story and pacing is top-notch though, revealing each key plot point at just he right time to keep things from feeling rushed or stale. The Phantom Stranger never wears out its welcome and should keep viewers curious from start to finish.

The main featurette, “Cold Red War,” uses Superman: Red Son itself to help break down and explain the real-life history and impact of the Cold War in what ultimately ends up being a fascinating history lesson and exploration of Superman’s character. The nearly 17-minute featurette includes interviews with assorted animation and comic book pros along with academics. It’s nothing groundbreaking, but it’s still a worthwhile watch for those interested in learning more of the history that inspired Superman: Red Son. The disc then wraps up with an over 10-minute preview of the next DC Universe Movie title, Justice League Dark: Apokolips War, which looks to be bringing the in-continuity DC Universe Movie titles to an end, the classic two-part Justice League episode “A Better World,” two Superman: Red Son digital comics, a selection of trailers and previews for other DC Comics-related titles and additional copies of the film in regular Blu-ray and Digital formats. Please note the bonus content for the 4K Ultra HD Blu-ray release of Superman: Red Son is on the regular Blu-ray disc.

Warner Bros. Home Entertainment has put together a good package for the Superman: Red Son animated movie, and basically delivers what we’ve come to expect from them for the DC Universe Movie line. Could there be more detailed bonus content? Without question, but what we get here is an acceptable amount, especially with the inclusion of an enjoyable animated short. Of course, the studio has also provided a predictably strong video and audio transfer for the movie across all formats, arguably the most important aspect of any home media release. For fans looking to watch Superman: Red Son in the best possible format, the 4K Ultra HD Blu-ray release is unquestionably the way to go, but the regular Blu-ray and Digital HD presentations do serve as fine alternatives. Bringing together a fascinating feature presentation and a small batch of bonus content worth checking out, Superman: Red Son definitely comes Recommended!

Please note that while Warner Bros. Home Entertainment provided The World’s Finest with a 4K Ultra HD Blu-ray copy of Superman: Red Son to review, that had no bearing on the product’s final assessment. The author did purchase a copy of the film on iTunes for completion and comparison purposes.

[ Continue on to the Superman: Red Son Feature review ]