The Adventures of Batman

Warner Bros. Home Entertainment has announced it will release The Adventures of Batman: The Complete Collection to Blu-ray on February 28, 2023. Produced by Lou Scheimer’s Filmation studios, The Adventures of Batman aired debuted in 1968, airing until multiple names and in multiple formats during its run. Continue below for the press details and package artwork.

THE ADVENTURES OF BATMAN:
THE COMPLETE COLLECTION
POPULAR FILMATION PRODUCTION IS NEWLY REMASTERED
FOR ITS FIRST-EVER RELEASE ON BLU-RAY STARTING FEBRUARY 28, 2023

One of Filmation’s most beloved animated series has been newly remastered in high definition for release on Blu-ray for the first time ever! Warner Bros. Home Entertainment will distribute The Adventures of Batman: The Complete Collection on February 28, 2023, as a two-disc set featuring all 34 episodes of the classic series for $29.98 SRP (USA) and $39.99 SRP (Canada). 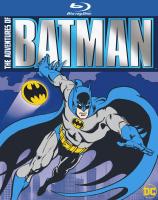 Soule and Kasem became the reigning voices of Batman and Robin, respectively, for several years as the Dynamic Duo would appear in two The New Scooby-Doo Movies crossovers, various versions of Super Friends, and The New Adventures of Batman.

Premiering on September 14, 1968, The Adventures of Batman also featured Batman’s primary rogues’ gallery at the time – Penguin, Mr. Freeze, Catwoman, Riddler, Scarecrow, Dollman, Mad Hatter and Simon the Pieman – as well as some notable team-ups of those villains.

The 34 episodes in The Adventures of Batman: The Complete Collection are:
• My Crime Is Your Crime / A Bird Out of Hand
• The Cool, Cruel Mr. Freeze / The Joke’s on Robin
• How Many Herring in a Wheelbarrow? / In Again, Out Again Penguin
• The Nine Lives of Batman / Long John Joker
• Bubi, Bubi, Who’s Got the Ruby? / 1001 Faces of the Riddler
• The Big Birthday Caper / Two Penguins Too Many
• Partners in Peril / The Underworld Underground Caper
• Hizzoner the Joker / Freeze’s Frozen Vikings
• The Crime Computer / The Great Scarecrow Scare
• A Game of Cat and Mouse / Beware of Living Dolls
• Will the Real Robin Please Stand Up? / He Who Swipes the Ice, Goes to the Cooler
• Simon the Pieman / A Mad, Mad Tea Party
• From Catwoman with Love / Perilous Playthings
• A Perfidious Pieman Is Simon / Cool, Cruel Christmas Caper
• The Fiendishly Frigid Fraud / Enter the Judge
• The Jigsaw Jeopardy / Wrath of the Riddler
• It Takes Two to Make a Team / Opera Buffa

The Adventures of Batman: The Complete Collection arrives February 28, 2023 on Blu-ray. Stay tuned for further updates and coverage right here at The World’s Finest. To discuss this news, click the link below.

Click here to discuss this news at The DC Animation Forum and then keep the conversation going at Pop Geeks!