Description: La-La Land Records, DC, and Warner Bros. Animation present the original score to the acclaimed 2019 DC Animated Movie Teen Titans Go! vs. Teen Titans. Composer Jason Lazarus crafts a wonderfully brilliant original score, full of comedic fun and heroic excitement – finding the perfect pitch for this vastly entertaining and action-packed tale in which the present-day Teen Titans take on their classic 2003 counterparts, only to band together to fight common enemies! The album producers of this special CD release are Joseph Trapanese and Dan Goldwasser, with mastering by James Nelson, and colorful art design by Dan Goldwasser. This is a limited edition of 1000 Units. LLLCD 1510. 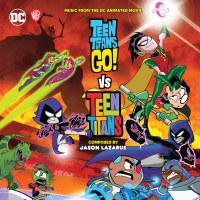 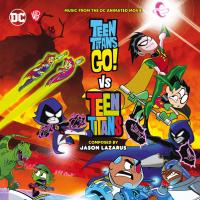 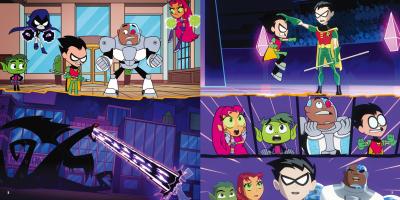 As suitably epic as the movie it scores, the soundtrack to Teen Titans Go! vs. Teen Titans is bold, boisterous and bursting with energy. Composer Jason Lazarus creates a score that perfectly matches the film’s energetic, slick pace, while also retaining every last bit of its lively, exciting (and sometimes very human, and moving) tone. While it’s debatable that the score doesn’t break any new ground, the material here is still a fun, addictive, pulse-pounding listen.

Lazarus makes sure to stick with the themes and cues we’ve come to expect from Teen Titans Go! and Teen Titans, but he isn’t beholden to them. The score stills falls within the lines of what we’d expect a soundtrack to a movie featuring these characters would be, but he also plays around a bit. The soundtrack to Teen Titans Go! vs. Teen Titans hits the ground running (with the track “Titans vs. Titans,” appropriately) and rarely lets up, only taking brief pauses for a couple of quiet moments before picking right up and blasting off again. By no means is that a negative thing, but the pace is so aggressive, so fast, and most of the tracks so quick, that some pass without really making a lasting impression. Unfortunately, this does also impact the album as a whole, as it too feels like it ends just a shade too soon.

That said, what’s here is pretty fantastic, despite the noted shortcomings. The soundtrack lays out the movie’s story from track to track, taking us through every major action beat and character moment, and Lazarus makes sure every minute is packed with energy and excitement. And even when some of the tracks lean a little into comedic, satire and/or tongue-in-cheek territory, as expected, they never stop being so addictively enjoyable, nor do they lose any step.

What works so well in favor of this soundtrack is the sheer variety of music, and so many of those tracks are excellent. Early in the soundtrack, Lazarus gives the track “A Portal Opens” a fitting, dramatic (one guess who’s coming through that portal from 2003), which smoothly transitions to “Meet the Contenders,” which itself leads into the awesome, blood-pumping “Countdown.” Even without the visuals to aid these tracks, there’s a subtle through-line that really keeps these tracks, no matter how different they may sound, together.

Teen Titans Go! vs. Teen Titans is littered with great music, and while the album is solid overall, despite an issue or two, there are some tracks that really stand out. “Tournament of Champions” is cool as all heck, has a touch of silliness to it, but ends up morphing into this action-driven tune that has such a great heroic beat to it. “Amends” is a nice low-key tune, setting up the danger and dramatic stakes of the movie, and leads perfectly to the equally dramatic “Inner Demon,” which itself pairs nicely with the latter tracks “Under Siege” and “No Time for a Plan” (even “Sinister Plan,” too).

Other highlights include “The Unkindness,” which gives off serious Batman Beyond vibes, and this hilarious alternate version to the song “We are the Titans,” which both Teen Titans teams sing during the movie. Lastly, “Worlogog” is unquestionably the funnest, goofiest and flat-out silliet tracks on the album. It’s got this cool, retro pop-ish vibe to it that’s just pure Teen Titans Go! and is just impossible not to love.

And as enjoyable and as fun as this soundtrack, with Lazraus clearly putting his own little touches throughout, it never pushes itself. Yes, the score is littered with great nods and moments that are pure Teen Titans Go! and Teen Titans, but it zooms by too fast and falls just shy of becoming something really unique and different. The score maybe plays it a little too safe, but by no means is that a real strike against the album, more of a nitpick. There’s a lot of great stuff here, just not enough to really set it apart.

In terms of the presentation for the soundtrack, it’s yet another top-notch release by La-La Land Records. On disc, the tracks sound full, crisp and full. You can hear and feel every beat, every key, every cue, and the album itself, while maybe sounding a little scattered, plays fairly smoothly from start to finish as an enjoyable overall experience, ending on a note so appropriately goofy for the characters of Teen Titans Go!. This is all housed in a slick package, superbly fashioned by Warm Butter Design. The lack of liner notes is a little disappointing, but in its stead is a hefty selection of imagery from the movie. It’s simply a solid product, through and through.

All of that said, this soundtrack is just … well … fun! Teen Titans Go! vs. Teen Titans is a thrill ride of fast-paced epics and wicked beats, with the occasional reflective or ominous pit stop before blasting straight ahead for goofy laughs. Composer Jason Lazarus creates a score that captures a lot of sounds we’ve come to expect from Teen Titans Go! and Teen Titans, and while it doesn’t go far enough, it goes a rewarding distance. Recommended!

Please note that while a review copy was provided by La-La Land Records, that had no impact on the product’s final assessment. 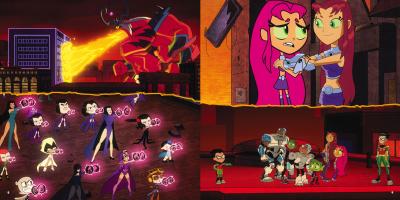 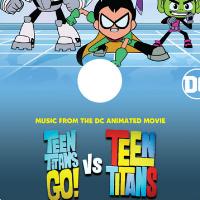 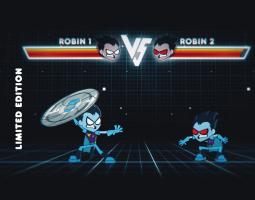 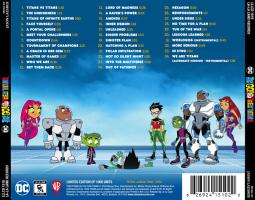