Description: It’s a full plate of crime-fighting and chaos as Robin, Cyborg, Starfire, Raven and Beast Boy go up against killer villains such as Brother Blood, Mad Mod and their archenemy Slade. Get ready for all the big battles and unbreakable bonds that make these friends the unstoppable Teen Titans!

Light-hearted, fun and riddled with charming character beats and cool action, Teen Titans left a definite mark on the superhero animation landscape when it debuted in 2003. The animated series amassed a huge following, one that remains devoted to the series to this very day. And finally, those fans get to experience this charming animated series in sweet widescreen HD, and it’s truly something to behold. Warner Archive has whipped up a stellar release for Teen Titans: The Complete Series, an excellent Blu-ray title that both long-time and even casual/new fans should snatch up!

Thoughts on the Teen Titans series itself will be brief, as the focus is this arguably long-awaited Blu-ray connection. That said, a few words on this classic series still need to be said.

One can’t help but notice, right out the gate, how confident this series was about what it wanted to be and what it wanted to deliver. Teen Titans character designs, each member’s distinct character quirk and place on the team, or just the overall tone, Teen Titans makes everything clear right from the start. The creators behind this series knew that – at the time – an action series like this could be a risk, but their conviction in their abilities is tangible from the get-go, and that helps in really giving the show the steady foot it needs against its detractors. And it’s this confidence that serves the show throughout to its controversial series finale. After is establishes its world in the first season, it’s safe to say the scale just keeps growing with each following season. Like the show’s tone and character designs, Teen Titans took more than a few risks, and they paid off tremendously.

It also helps that Teen Titans takes the time to give every member of the team the spotlight throughout the series, with each season focusing more on certain member from the team. Robin, Raven, Starfire, Cyborg and Beast Boy all get plenty of time in the spotlight, all with deep dives into their characters’ respective histories. Raven’s arc in particular remains a series highlight, as does Teen Titan‘s take on the classic “The Judas Contract” comic storyline. Not only do these storylines reinforce their importance and role in the team, but they tend to help push character development forward in meaningful ways. These are great characters and the team dynamic between the five is inspired.

Teen Titans holds up exceptionally well all these years later and honestly, upon revisiting, it’s better than I remember it. Is every episode a home run? Of course not, as it is with nearly any other series, but it remains a stellar series nonetheless and, if for whatever reason you haven’t given it a shot, now is the opportune time to. Warner Archives’ Teen Titans: The Complete Series not only has the 65-episode entire series, but it also includes the “lost episode” and spin-off Teen Titans: Trouble in Tokyo movie. Besides, the series remains a breathe of fresh air from the standard superhero fare, and offers up a fun, unique take on the beloved DC Comics characters. It’s fun, wholesome and balances the show’s comedic bent and the heavier material with ease. Give Teen Titans a go! It’s a series well worth your time.

Moving to the actual Blu-ray release of Teen Titans: The Complete Series and, much like this show itself, the end product is fantastic. Housed in a chunkier-than-usual Blu-ray case, the entire DC Comics-based animated series, along with the spin-off movie and bonus content, are all included on the set’s six discs. And much like the physical set, the content housed within looks sharp. 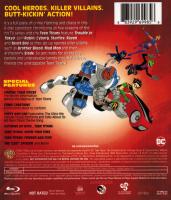 Looking first the audio and video quality, it’s a great overall presentation, though not perfect. The video transfer is bold and relatively crystal clear, nicely bringing the show’s bright color scheme to vibrant life. However, some episodes are littered with white specks that intermittently pop on the screen. The image also appears occasionally blurred and washed out at times, particularly with some cenes involving quick, fast motions. This could possibly be the result of the actual source material, as digital coloring at Warner Bros. Animation was in its relative infancy as this show was rolling out. Macroblocking is also noticeable, varying in noticeable amounts episode to episode. The audio is as clear as can be, however, thanks to an excellent DTS HD 2.0 mix. Even with the small image issues, Teen Titans has never looked or sounded so great.

To cover the bonus content ported over, starting with Season One, “Finding Their Voices” features the cast, producers and voice director Andrea Romano discussing how they found the voice cast for the series. After that, “Comic Creations” details the Teen Titan’s comic book origins and the character’s jump from the four-color page to the screen. It features appearances from comic talent along with those from the animated series. Next a Puffy Ami Yumi music video and a preview of the Hi Hi Puffy AmiYumi animated series, followed by a “Puffy AmiYumi” featurette, which is a fluff piece of the band, who provide the show’s theme song, being interviewed by the Teen Titans. Two bonus episodes of The Hiros is also included. On the Season Two disc, “Catching up with … Teen Titans” is the disc’s sole extra and recaps the first season and serves as a nice refresher if needed.

Continuing, Season Three bonus content is a “Teen Titans: Know Your Foes” featurette which looks at the big foes of the season with insight from the series’ producers and writers. Season Four also includes a “Teen Titans: Know Your Foes,” featurette, but it focuses on the bad guys found in the fourth year of the series. “Teen Titans: Friends and Foes,” the sole extra for Season Five, is pretty self-explanatory, looking at both the good and bad guys who do battle in this series, again featuring comments from the cast and crew. The bonus disc for Teen Titans: Trouble in Tokyo includes the 12-minute “The Lost Episode,” a 12-minute episode that was originally released online as part of a promotional effort when Teen Titans was on the air. Unfortunately it’s in standard definition quality.

Overall, for fans of Teen Titans, this collection is a no-brainer purchase. Not only is the entire animated series presented in stylish HD available on Blu-ray, but Teen Titans: The Complete Series also ports they key bonus content from the original DVD releases. Granted, this set would’ve been worth it for just the episodes alone, but the bonus content is a nice touch. While the set does have a few small issues, they are minuscule in at best and don’t take away from its overall quality. This is the Blu-ray collection that fans have been waiting for, and Warner Archive does not disappoint. Highly Recommended!

And just a little extra note, once you’re done soaking in the excellent Teen Titans: The Complete Series Blu-ray collection, I highly recommend picking up the recent Teen Titans Go! vs. Teen Titans animated movie. It’s a legitimately great animated feature that’s smart, hilarious, even a little touching, and does justice to not only Teen Titans but to the long history of these teen super-heroes, too. Click here to check out the review.

Additionally, Warner Archive is also giving separate Blu-ray releases for all five seasons of Teen Titans and Teen Titans: Trouble in Tokyo. The artwork for all six titles can be found below.

Please note Warner Archive provided a copy of this title to The World’s Finest for review, but that had no impact on the product’s final assessment. 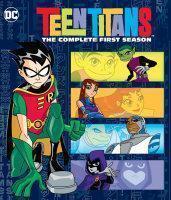