Providing an early look at the Blu-ray and single-disc DVD package art, Warner Home Video has released a trade ad for the upcoming Justice League: Crisis on Two Earths direct-to-video animated feature. To view the trade ad, click on the thumbnail image below. 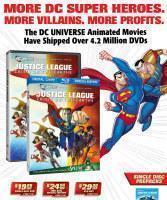