The stars come out for Andrea Romano.

You need a voice echoing the All-American trust of Superman? Romano gets Mark Harmon for his maiden voyage in animation. Youre seeking a subtly evil performance as the intelligent-bordering-on-insane Owlman? James Woods is willing to do it from a little booth in Rhode Island. Whatever the role, no matter the production, actors pushaside their Oscars, Emmys and Tonys to step behind the microphone and play with Romano.

Justice League: Crisis on Two Earths is the seventh entry in the ongoing series of DC Universe animated original PG-13 movies, and each has featured all-star casts with Romano at the reigns. From Neil Patrick Harris, Brooke Shields and Alfred Molina to Virginia Madsen, Nathan Fillion and Kyra Sedgwick (to name but a few), Romanos casts are packed with the faces normally reserved for lead roles in feature films and primetime television series.

Romano has been one of the driving forces in animation voiceovers for more than a quarter century, amassing a list of credits that range from dramatic (Batman: The Animated Series) to silly (Animaniacs) to hip (The Boondocks) and timeless (The Smurfs). The six-time Emmy Award winner (and 20-time nominee) has not only set the standard by which industry veterans measure the art, but she has become a household name to animation fans across the globe, regularly drawing standing ovations and endless applause during her annual Con appearances.

Warner Home Video will distribute the full-length animated Justice League: Crisis on Two Earths on February 23 as a Special Edition 2-disc version on DVD and Blu-Ray Hi-Def, as well as single-disc DVD, and On Demand and Download.

Romano found time in her busier-than-youd-ever-believe schedule to discuss the cast of Justice League: Crisis on Two Earths. The questions are simple, but the answers are pure Andrea Romano. Take a read

QUESTION: James Woods has quite the resume, including plenty of animation experience. How is it that you had not worked with him until now?

ANDREA ROMANO: Ive been a huge fan of James Woods and wanted to work with him for years. We actually had a Justice League production about five years ago that we had him booked for, and then the plug got pulled on the project. Ive been waiting for something else for him ever since and then Owlman came along, a perfect role for him.

We had to record him long distance, and his performance was very, very subtle so much so that I was worried that it wasnt going to play when it came back with animation. But it was perfect. It was subtle and nuanced and scary without being broad in any way, and it was wonderful to see such a subtle performance work in a big action piece. I cant wait to meet him in person.

QUESTION: On the flipside, the star of one of primetimes top rated series Mark Harmon of NCIS had never previously done animation. How did he do?

ANDREA ROMANO: I fell in love with Mark Harmon. I have admired his work for many years, but he hadnot done this kind of work before, and so you always run the risk of several different situations occurring when you bring in someone who is new to animation. But Mark Harmon completely put himself in my hands, and totally let me show him how this work is done. I certainly didnt have to teach him acting, but he was completely agreeable to trying options, had ideas of his own, and had complete trust in my process. So it was a terrific experience for both of us. I think hes a wonderful Superman. Although hes older in years than how we typically portray Superman, his voice with the model was right on.

QUESTION: Gina Torres is another Joss Whedon alum making an appearance in the Timmverse. What made her right for Superwoman? 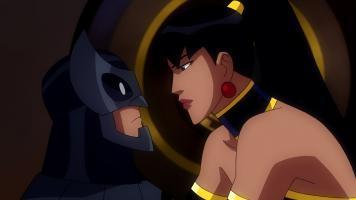 ANDREA ROMANO: Ive had the great pleasure of working with Gina over the years, and she is as beautiful to work with as she is visually. What makes this particular performance so great is that she plays a truly evil character and, if you didnt know her personally, youd think that was what she was like in real-life. She wore this role like a glove.

We recorded Gina separately from James Woods, and their characters are love interests. Without the benefit of being in the same room, let alone the same coast, Gina brought an energy that matched his perfectly. Shes such an instinctual actress. And especially for Superwoman, Gina really put herself into the role. She is sexy. She doesnt have to play sexy she IS sexy.

One of the interesting things about Ginas performance is that when she first recorded, she had a cold and it manifested itself as kind of deeper and textured. But when she came in for ADR, she was perfectly healthy, and much more pure and clear so we had to make a little bit of an adjustment to make sure she didnt sound too sweet.

QUESTION: Did William Baldwin have any trouble mastering Batman?

ANDREA ROMANO: I thought he did great I love the texture of his voice. The performance is spot-on. The only issue was that William hasnt done a lot of voiceover work in this genre. We do a lot of impact sounds that come with this kind of an action piece, and being the method actor he is, he insisted on actually striking his own body physically when he had to do umphs and ohs and impacts. By the time he was done, he mustve been bruised. We were a little worried for him. When we brought him back in for ADR, we asked him to please not hit himself, and we showed him how to do those grunts and ughs In this film, Batman wasnt a big role, but its an important role, and I think William really filled it well. Someday Im going to get all the Baldwins in the same room.

QUESTION: Chris Noth is another animation novice. Did he enjoy his time as a good Lex Luthor?

ANDREA ROMANO: Chris Noth thought he was going to be playing the evil Lex, and I think he was disappointed he didnt get to play a villain. Still, he came through and gave a really good performance. What was funny was that at the end of the entire recording process, Chris was our absolute last session of ADR on a late Friday afternoon. To celebrate, they brought in a tray of Cosmos, and our own Susan Chieco had a very Sex in the City moment of walking a Cosmo in to Chris Noth. He cheered up considerably at that point.

QUESTION: How did you end up promoting Bruce Davison to President?

ANDREA ROMANO: I met Bruce at a wedding about 20 years ago and have admired his acting for so long anyway. It was another one of those perfect matches of voice and character. We had this nice role of the President that needed some gravitas to it and, at the same time, this particular President was a bit of a coward. Bruce was able to give us both of those aspects in just the right doses.

QUESTION: In your opinion, what will win the Academy Award for Best Animated Film?

ANDREA ROMANO: Up was my favorite movie of the year. Think about it: Im a voice director, and I was captivated by the first 10 minutes of the film which has no voice, and yet its some of the best storytelling Ive ever seen in a live-action or animated film. You really run through the gamut of emotions. I also thought the kid was charming, and Ed Asner was so wonderful. Plus, who doesnt like looking at a huge collection of balloons, and a house that can fly? 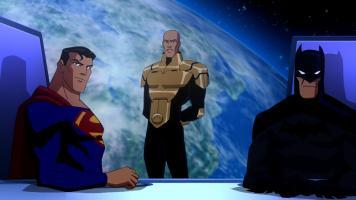 S_Lex_B.jpg
Under the direction of Andrea Romano, the voices of Superman, Lex Luthor and Batman Mark Harmon, Chris Noth and William Baldwin, respectively meshed perfectly with their characters in Justice League: Crisis on Two Earths, the next DC Universe animated original movie. The film will be distributed February 23, 2010 by Warner Home
Video.