In further details made available from Time Warner Investor Day event, held yesterday in New York City, New York, comes confirmation of the premiere date for Green Lantern: The Animated Series along with confirmation of a new direct-to-video animated feature. The image below, from a presentation given at the Investor Day event, highlights upcoming initiatives for the “Green Lantern” brand. Click on the thumbnail below for a closer look. 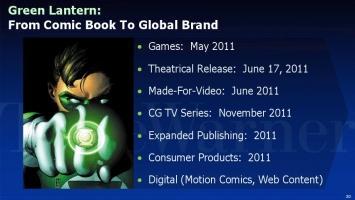 According to the above image, Green Lantern: The Animated Series is set to premiere November 2011 on Cartoon Network. The image also confirms the series will be a CGI-animated series. In addition to an animated series, a new as-of-yet untitled Green Lantern direct-to-video animated feature is set to debut June 2011 from Warner Home Video. Further details on both projects are expected in the near future.