Cartoon Network has released early schedule details for the January 2011 installments of Young Justice, the new animated series from Warner Bros. Animation. Young Justice is slated to air Fridays at 7pm (ET) on Cartoon Network beginning January 7th, 2011. The schedule break-down is as follows below. 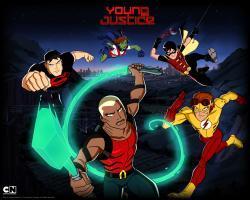 Early plot details include the team facing off against Mister Twister, the first official Young Justice team mission, and an exploration of their training. Detailed episode loglines, along with further media and descriptions, are set for release soon.