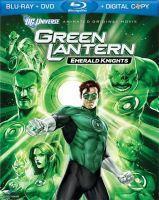 For the week ending June 12th, 2011, the Green Lantern: Emerald Knights Blu-ray accounted for 56% of total unit sales for the Warner Home Video title. This shows a major increase in Blu-ray sales for a DC Universe Animated Original Movie title over its DVD counterpart, though this is not a surprise given the lack of regularly available Two-Disc Special Edition DVD release for Green Lantern: Emerald Knights. Outside of the Blu-ray title, a standard one-disc DVD release is widely available, though the Two-Disc Special Edition DVD title is currently a Wal-Mart exclusive for the United States.

Sales numbers are expected to be released next week.