New episodes of the acclaimed animated series Batman: The Brave and The Bold and Young Justice will continue airing on Cartoon Network for the month of October 2011. The network has provided specific episode details for both fan-favorite shows. Both Young Justice and Batman: The Brave and The Bold will debut three new episodes during the month. Schedule details for upcoming episodes are available below, with unaltered episode descriptions directly from Cartoon Network. 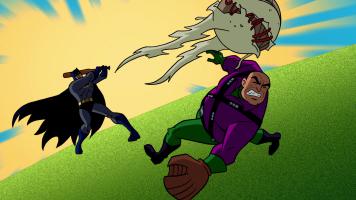 Batman: The Brave and The Bold
Friday, October 7th, 2011 at 6:00pm (ET) – “#60 Triumvirate of Terror!”
Batman, Superman and Wonder Woman face off against their arch nemesis Lex Luthor, Joker and Cheetah who gain the upper hand by switching opponents.

Batman: The Brave and The Bold will be pre-empted on October 28th, 2011 due to a special airing of the animated feature The Batman Versus Dracula.

Cartoon Network has also released episode details for the October 2011 installments of the acclaimed Young Justice animated series. All episodes of Young Justice airing in October 2011 will feature the appearances of DC Comics characters new to the series. The episode breakdowns are provided below.

Young Justice
Friday, October 7th, 2011 at 6:30pm (ET) – “#13 Alpha Male”
Already exhausted and rattled after a home turf invasion of The Cave, The Team learns that Aqualad their friend and leader withheld vital information that put them all at risk. When Batman sends the Team and new den-mother Captain Marvel to India to investigate bizarre reports of armed animals attacking human beings, can Aqualad pull his fractured Team together?

Young Justice
Friday, October 14, 2011 at 6:30pm (ET) – “#14 Revelation”
When Plant Creatures attack major cities around the world, The Team is eager to join the fight alongside the Justice League. Instead, Batman assigns them a still more dangerous task taking out the plants masters: a secret society of super- villains: the Injustice League!

Young Justice
Friday, October 21st, 2011 at 6:30pm (ET) – “#15 Humanity”
The Team is on the hunt for Red Tornado, determined to find out once and for all whether the robot was the mole even if it means kidnapping new friend Zatanna and dragging her along on their quest!

Young Justice airs Fridays at 6:30pm (ET) on Cartoon Network. The above content can also be found at the The World’s Finest Young Justice subsite.

Young Justice will be pre-empted on October 28th, 2011 due to a special airing of the animated feature The Batman Versus Dracula.

Stay tuned for further schedule updates and coverage on both Batman: The Brave and The Bold and Young Justice, including exclusive content and more, here soon at The World’s Finest.